Kenyan woman in court for defrauding a Dutch National of Ksh 2.9m in suspicious surrogacy deal 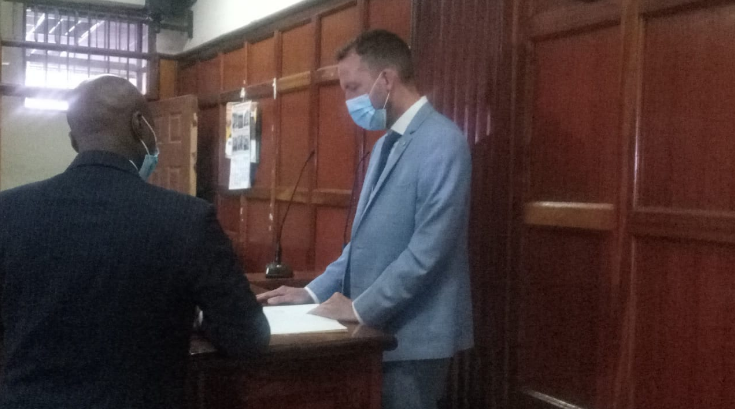 A Kenyan woman, Ms. Winnie Warigia Maina, was arraigned in court on Tuesday, and charged with defrauding a Dutch foreigner of Kshs 2.9 million, by claiming she could offer him surrogacy services through her fertility company.

Ms. Wariga Maina, a director of Family Fertility and Surrogacy Agency Limited, has been accused of acting jointly with others, who were not arraigned in court, by claiming she could offer Mr. Dion William Van Aardt surrogacy services through FFSA Ltd.

An emotional Mr. William narrated to the court how he met the accused Ms. Wariga Maina, who promised to help him get a child through her company’s surrogacy services, but actually conned him out of Kshs 2.9 million.

“They showed me a contract between me and the surrogate and another with the agency,” the court was told.

Mr. Dion William then said that he signed the contract and paid a total of Kshs 2.9M to Winnie’s agency, going by the company name Family Fertility and Surrogacy Agency Limited.

“I felt I could trust Winnie Maina and her agency, so I signed the contract on January 17th, 2018,” he added

He then proceeded to Agha Khan Hospital in Nairobi for testing and examination, and was advised that his semen was healthy.

The court then heard that he was shown the first baby scan which revealed that it was a boy, and the elated victim started preparing for fatherhood; purchasing all the required things for the baby, from nappies to baby formula.

The victim went ahead and even started making preparations for hiring a house help to assist.

He was then shown a second scan which then revealed that it was a baby girl; Mr. William was still ecstatic, and decided to name the child after his mother.

A couple of months down the line, he got got a call from Winnie, who informed him that both the surrogate mother and child had died.

A distressed Mr. William decided to include his parents in this ordeal; they suspicion warranted them to request to see the two bodies; Ms. Wariga declined and demanded a fee.

The funeral home where Ms. Wariga claimed the bodies were, Umash Funeral Home, claimed that they had not received any of the remains.

Dion, now fully aware that something was a miss, decided to contact Aga Khan Hospital about his semen, and was advised that they were still secured and intact and at the hospital; that is when he realized that he had been conned and decided to contact and report the matter to the Kenyan Police.

Raila Drops Out Of Presidential Debate