Uganda says foils attack on funeral of ‘Lion of Mogadishu’ 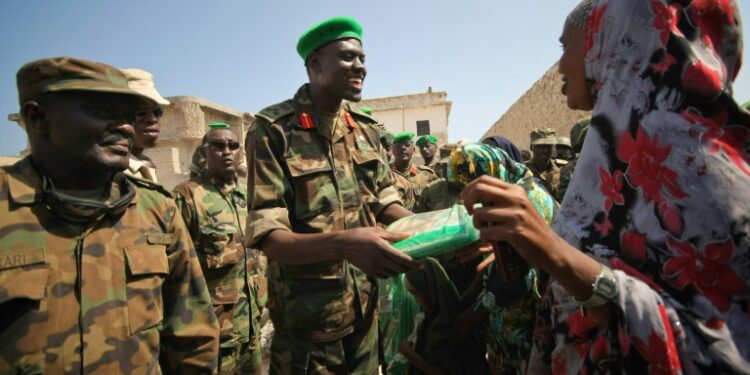 Uganda said Friday it had foiled a suicide bomb attack against the state funeral of a top police and army commander who led a major African Union offensive against Al-Shabaab militants in Somalia.

Security forces said they had arrested a man on Thursday in the northern town of Pader on the eve of the funeral for Major General Paul Lokech, nicknamed the “Lion of Mogadishu”.

President Yoweri Museveni blamed the plot on the Allied Democratic Forces (ADF) — a rebel group which first emerged in Uganda in 1996 but has been active in eastern DR Congo for decades and was recently linked to the so-called Islamic State.

“A suspected suicide bomber” was found with an array of bomb-making materials, army spokeswoman Brigadier Flavia Byekwaso said in a statement, identifying him as Ugandan national Katumba Abdul, also known as Ben.

“Investigations so far indicate that the suspect had intentions of disrupting the funeral proceedings of the late Maj Gen Paul Lokech,” Byekwaso said.

Lokech died at the age of 55 in his hometown of Pader on Saturday after suffering blood clots following a fall.

He had served two stints as a commander in Somalia with AMISOM — the African Union military operation fighting the Al-Qaeda-linked Al-Shabaab insurgents.

He led the units that routed Al-Shabaab fighters from the capital Mogadishu in 2011, a feat that earned him his nickname.

He also served with the Ugandan army in an operation in the Democratic Republic of Congo against the feared ADF and on a mission to help establish South Sudan’s armed forces.

Weaker target
Tributes were sent from Somalia and the international community for Lokech, who eight months ago was switched by Museveni from the military to the police force as deputy inspector general.

Security was tight for the funeral, with helicopter gunships hovering overhead as thousands of mourners gathered in Pader despite Covid restrictions.

In a speech read out at the funeral by his internal affairs minister Kahinda Otafiire, Museveni accused the ADF of plotting an attack against a “weaker target” after failing to kill Lokech while he was alive.

“Because of his work, and the fight against criminals and terrorist networks, Lokech has been a target of ADF terrorists, and that’s why they targeted mourners here in Pader.”

The ADF is the deadliest of scores of armed militias that roam the mineral-rich eastern DRC and blamed by the country’s Catholic church for thousands of deaths. In March, the United States said it was linked to the Islamic State group and identified its leader as Seka Musa Baluku.

Towering icon
Museveni said in a statement on his website that as a student Lokech had provided the army with information on the notorious Lord’s Resistance Army, which launched a bloody rebellion in northern Uganda three decades ago that has since spread to several neighbouring countries.

AMISOM described Lokech as a “towering icon” in the fight against armed militants.

“We all remember him as a man of character, great courage, integrity, and honor,” it said in a statement this week.

“He was a brave and strategic fighter, who was instrumental in commanding the counter-insurgency operations that drove Al-Shabaab out of Mogadishu.”

In Somalia, a former top counter-terrorism official at the information ministry, Abdiasiz Mohamed Guleid, described him as a hero and said Lokech’s role in liberating Mogadishu “will never be forgotten”.

In 2018, the Ugandan army said Somali troops had opened fire on Lokech’s convoy in Mogadishu, when he was head of the Ugandan contingent of AMISOM.

Although Al-Shabaab militants were ousted from Mogadishu a decade ago, they still hold sway in other parts of the country and continue to wage attacks on civilian and military targets in the capital and elsewhere.