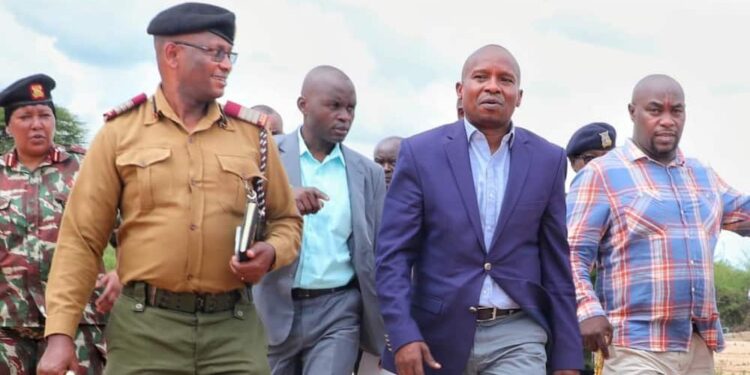 Interior Cabinet Secretary Kithure Kindiki has told police officers to make use of their guns whenever necessary in dealing ruthlessly with criminals .

Speaking during a tour of Laikipia, Kindiki said the security officers are justified to use their service weapons against criminals to defend themselves and the lives of citizens .

The CS says that the government will no longer negotiate with the criminals and illegal invaders who have defied repeated pleas to leave.

He assured the police of protection against possible retribution for enforcing the evictions.

“The guns you have are neither flowers nor ornaments.

“They are the property of the Government that has entrusted them to you to protect the lives and properties of citizens and yourselves from criminals and other rogue elements,”

At the same time Kindiki issued a warning shot to herders who have invaded private farms in Kitui, Laikipia and Meru counties.

“We will not indulge in sideshows with those who wish to drag us into pointless theatrics. Just recently, we lost eight police officers in Turkana East due to a bandit attack.

“We also lost 42 security officers in Baragoi to criminals a few years ago, and yet there are some who suggest that we should bargain with criminals who are out to kill our police officers. “We will not negotiate with them,”

However, he urged the security personnel not to misuse their guns while executing their mandate but use them to secure their lives, the lives of citizens, and their property.

“I want to challenge the criminals who think they have better weapons, tactics or instruments of violence than the government to dare face us,” he said.

“We will follow them anywhere they are. We won’t leave this area until we end this menace,” he added.

“No one has the permission to graze their livestock wherever they want without the consent of the owners of those fields. All the grazers and herds people must leave this place before we get to them,” Kindiki said as he ordered illegal herders to leave with immediate effect.

The directive follows recent flare-ups between armed herders and local farmers who accuse the pastoralists of deliberately driving camels and other livestock into farms and thereby destroying crops.

The CS said that a crack operation has been launched to back up the directive until the last herder is driven out.

The government has since ordered recruitment of additional national police Reservists in volatile areas and announced the deployment of specialized police units including the GSU, RDU, and ASTU in some parts of the country to combat cattle rustling and general insecurity.

Chad Lawyers to Stop Work Over Mass Trial of Protesters