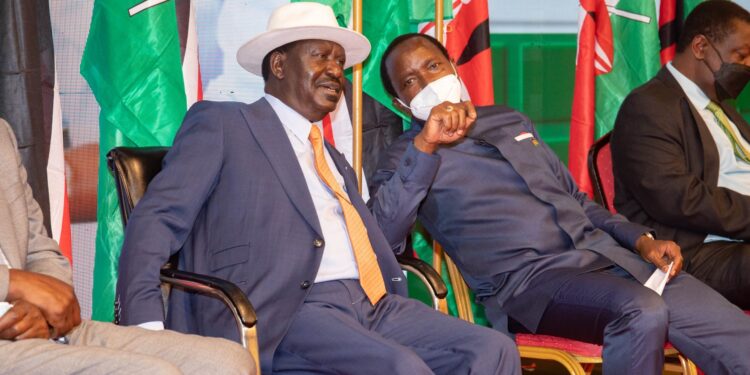 Azimio La Umoja One-Kenya has formally been registered as a Coalition Political Party.

The Registrar of Political Parties Ann Nderitu on Wednesday gave notice to members of the public that the outfit comprising of 23 political parties had been duly registered following due process.

The Coalition whose presidential flag bearer is former Prime Minister Raila Odinga had on April 1, 2022 deposited contents of the alliance agreement in Nderitu’s office.

Following the successful registration, the Coalition’s Political Party’s symbol and colors will be five stars against a blue background in the midst of the words Azimio La Umoja One Kenya Coalition Party.

This comes barely a day after four constituent parties belonging to the outfit and are members of the One Kenya Alliance (OKA) called for a halt of the registration citing unresolved issues which were however later addressed by the Coalition Party Secretariat.

The wing led by Wiper Party Leader Kalonzo Musyoka, Gideon Moi of KANU, Cyrus Jirongo of the United Democratic Party (UDP) and Ugenya MP David Ochieng party leader of the Movement for Democracy and Growth demanded that certain issues must be ironed out before the registration process is finalized.

“Our objection is premised on the fact that three (3) issues have not been agreed upon and are to be deliberated and agreed upon before the Agreement is fully registered,” the Secretary Generals of the four parties demanded in a statement.

The Secretary Generals claim that the agreement which was lodged at the Office of Registrar of Political Parties Ann Nderitu on April 1, 2022 was “was withdrawn and certain clauses amended or altered without the consent of all the parties and signatories”.

Waiguru nominated as an Amujae Leader in the Ellen Johnson Sirleaf (EJS) Presidential Center for Women and Leadership.