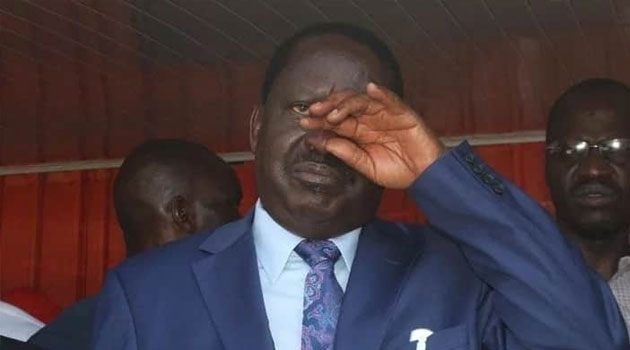 ODM Party leader Rt. Hon. Raila Odinga has hit back at Gatundu MP Moses Kuria who he accused of resorting to abuses by describing him as uncircumcised.

Mr. Odinga who spoke in Teso when he started his four-day campaign of Western Kenya region on Friday noted that those who claim he is uncircumcised have no respect for communities that culturally do not practice circumcision.

“The other day you heard people insulting me that I am not fit to lead the country because I have not been circumcised.

“That person is not only abusing me and the people of the Luo community but all the other communities that do not practice circumcision. They are simply telling you that you and your children are incapable of leading,” Raila said.

Gatundu South legislator Moses Kuria criticized President Uhuru Kenyatta for going against an alleged 1969 oath that bars the Mt Kenya community from electing a leader who comes from a community that doesn’t practice circumcision.

The lawmaker claimed that the oath was administered on the community by the country’s founding President Mzee Jomo Kenyatta.

“Uhuru is going against his father’s wish by supporting Raila Odinga and he knows what Kenyatta said. We even took an oath never to support Raila for the presidency and that is why we are backing Ruto,” Kuria said.

The former Prime minister however, challenged Kuria and those who claim that he is uncircumcised to explain to the public how they know Odinga had not undergone the cut.

“First question, how does he know that I have not been circumcised?” Raila posed.

“Question number two, you are a man just like me and why are you interested with my manhood?”

Kuria has since defended his statement denying it was an attack on any community but a proclamation of what the communities in the Mt Kenya region have been told over the years.

During his Campaign tour in Teso, Raila reassured the residents that if elected President he will deliver on all his campaign promises notably that of bettering health care services in the country and empowering the unemployed.

Mr. Odinga is on Saturday set to take his campaigns to Sabatia in Butere, Khwisero, Shibuli, Shianda, Matungu and then hold a major rally in Mumias Town.

The former PM will then conclude his tour of the region on Monday after holding rallies in Lukuyani, Pan Paper, Lumukanda, Malava and Kambiri.

A truce in Ethiopia - does it make peace any more likely?

Treasury Sets Aside Ksh 8b to Fund Maize Flour Subsidy