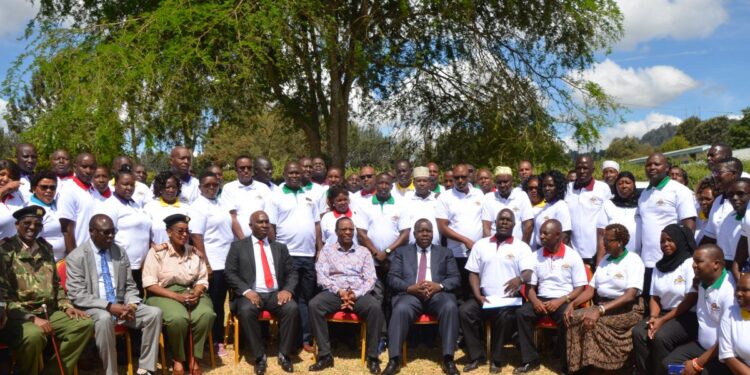 While addressing 114 chiefs drawn from the 47 counties today at the Nyeri Caritas social hall, Interior CS Dr Fred Matiang’i noted that cases involving teenage pregnancies have been on a steady rise in recent months and that it portends a real threat to the country’s future.

The CS has similarly cited HIV/AIDS as another challenge that has been described as a ticking bomb in the country after statistics indicated new infections were on a steady rise among young girls and boys.

He has therefore ordered the administrators to decisively address the challenges and warned anyone found abetting the vice would summarily be dismissed from service.

“We are currently facing a triple threat of HIV/AIDS, teenage pregnancies and Gender Based Violence which is a threat to the very future of our children and which we must confront as a government. Unless we do something to curb this trend, we risk losing our girls from the education system. Any chief who will therefore be found holding kangaroo plenaries to settle matters involving sexual offences against minors should be ready to exit from the service,” he told the administrators who were representatives of the National Chiefs Forum.

Dr Matiang’i has nevertheless underscored the government’s commitment in addressing the plight affecting the administrators including improving their working environment and a flexible scheme of service.

And unlike in previous years, the government plans to start upgrading assistant chiefs to chiefs instead of subjecting such vacancies to competitive interviews, said Dr Matiang’i.

“The challenges affecting our chiefs and assistant chiefs especially in terms of upward mobility have been discussed at the highest level within the ministry and resolved that future hiring will be done internally. This will cure the problem of an officer stagnating in one job group for years while others get recruited from outside and end up moving up the ladder. Why should someone be condemned to remain an assistant chief for the rest of his working life?” he posed.

The government has also promised to purchase an additional 10,000 motorcycles for chiefs and their assistants to ease mobility especially in far flung areas.

The motorcycles which will be supplied across the 47 counties will be in addition to 5,000 others currently in use.

Dr Matiang’i has also assured the administrators of the need to execute their core mandate in coordinating government functions diligently.

He said as government employees, their work is to ensure the country remains united before, during and after the general election without taking political sides.

Interior Principal Secretary Dr Karanja Kibicho on his part said chiefs were a vital cog in coordination of government policies at the grassroots and therefore needed respect and support to enable them achieve the mandate.

I Charge KSh 1.5 Million For A One Night Stand, Manzi Wa Kibra Discloses

From Pineapple And Corn Waste, Kenyan Woman Is Out To Fight Menstrual Poverty In Africa