IEBC: Independent Candidates To Submit Clearance Certificate, Symbols By May 2 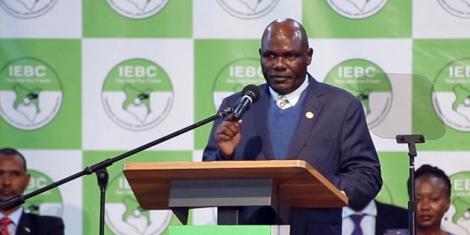 The Independent Electoral and Boundaries Commission (IEBC) has issued a raft of timelines for parties, candidates and the presidential polls with only four months to the August 9 General Election.

IEBC chairman Wafula Chebukati, in a statement on Tuesday, said individuals contesting independent candidates are required to present the IEBC with a clearance certificate from the Office of the Registrar Political Parties (ORPP), confirming that one is not a member of any registered political party by May 2.

Candidates are also required to service the commission with symbols they intend to use in the election by the same day.

Mr. Chebukati stated that the names and symbols will be published by the IEBC in the Kenya Gazette by May 13.

The candidates will then be required to collect statutory forms from county and constituency offices for purposes of collecting particulars of their supporters, after which they will be forwarded to the returning officers.

“The Commission shall reject the candidature of any Independent Candidate for any elective post if the candidate is not qualified or eligible for election under the Constitution, the Elections Act 2011 or any other written law,” said Chebukati.

Similarly, political parties are required to submit a membership list certified by the Office of the ORPP by Saturday, April 9 to the commission.

Parties are required to present IEBC with names of aspirants, dates and venues of the nominations by the same day, while nominations and intra-party disputes are supposed to be resolved by April 22.

“The parties should submit to the Commission on or before 22nd April, 2022, the name(s) and specimen signatures of authorized official(s) who shall certify to the Commission person(s) duly nominated,” Chenukati added.

In addition, presidential candidates contesting on party tickets or independently are required to return their duly filled statutory forms to IEBC by May 23.

The commission has pledged to uphold an integral electoral code of conduct in the polls.

During the launch of the ODPP Compendium on Electoral Justice on Monday, Chekukati stated that the commission’s code of conduct committee has so far delivered on its constitutional mandate to safeguard the electoral process and will not relax their guard in the upcoming polls.