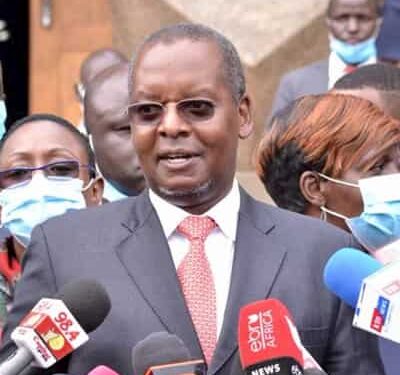 The former finance minister stated that the fondest thing he remembers about Kibaki is how he always rejected the naming of projects he oversaw after him.

“We tried him so many times for instance to have the Othaya hospital named President Kibaki hospital but he refused. On roads, Uhuru highway and Thika road he equally refused,” Kimunya said.

The Kipipiri MP challenged the current crop of leaders to emulate the selfless acts which were demonstrated by Kibaki.

“It is something we have to learn as leaders and focus on working for the people. That is who Kibaki was,” he said as he credited the late President with mentoring him on how to be a good leader.

Kenyan politicians, African leaders, the African Union and former colonial ruler Britain were among those to send their condolences

Details about his death have not been officially disclosed. However his health had fluctuated since a serious car accident in 2002 and he had been in and out of hospital in recent years.

Kibaki, who died aged 90 on Friday last week will be buried on Saturday at his rural home in Othaya in Nayeri County.

President Kibaki served as the country’s third president from December 2002 to April 2013, taking over from the authoritarian rule of Daniel arap Moi.

We Will Work With Those Willing To Work For Kenyans - Raila