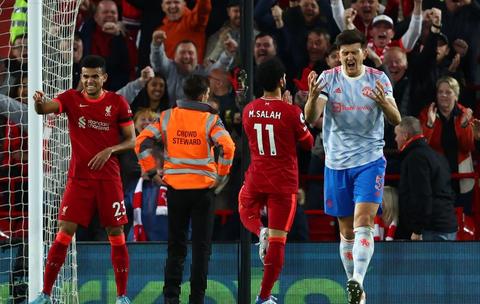 Liverpool thoroughly outclassed Manchester United at Anfield on Tuesday night, with their 4-0 win seeing them move into first in the Premier League ahead of Manchester City.

The win puts Jurgen Klopp’s side on 76 points from 32 games, two ahead of Pep Guardiola’s Man City, who play their game in hand against Brighton & Hove Albion on Wednesday.

The hosts wasted no time taking the lead, as Luis Diaz finished off a quick-hitting counter-attack right in front of David De Gea’s goal from an exquisite Mohamed Salah cross before five minutes.

The Anfield crowd was on their feet in the seventh minute as well, showing their support for United’s Cristiano Ronaldo, who was left out of the squad following the death of his newborn son on Monday.

The visitor’s problems got worse in the 10th minute when Paul Pogba limped off injured and with Ralf Rangnick’s side struggling to get any foothold in the game, it was no surprise when the home side doubled their advantage.

This time Salah was the scorer — his first of the night — slotting home past De Gea from Sadio Mane’s no-look pass into the area after a well-orchestrated team move.

Egypt international Salah snapped an eight-game scoreless streak for club and country with the goal, while Man United failed to register a single shot in the first half as Liverpool took a 2-0 lead into the break.

Manchester United were better after half-time, but Liverpool came to life after a sleepy restart out of the dressing room with Diaz setting up Mane for a clinical first-time finish to put the hosts three goals to the good.

Salah added further gloss to the scoreline, chipping the ball over De Gea’s head after being played in by Diogo Jota to ensure they provisionally moved ahead of Man City in the table.

It was a miserable night for United who are now without a win in their last eight league matches with Liverpool and have failed to score in five of their last six trips to Anfield.

Liverpool are now riding a 13-game Premier League unbeaten streak, the longest active such streak in Europe’s top-5 leagues and the longest for the Reds since a 27 game run between August 2019 and February 2020

United dropped below Arsenal on goal difference, falling to sixth place in the table on 54 points, having played two games more than the Gunners.