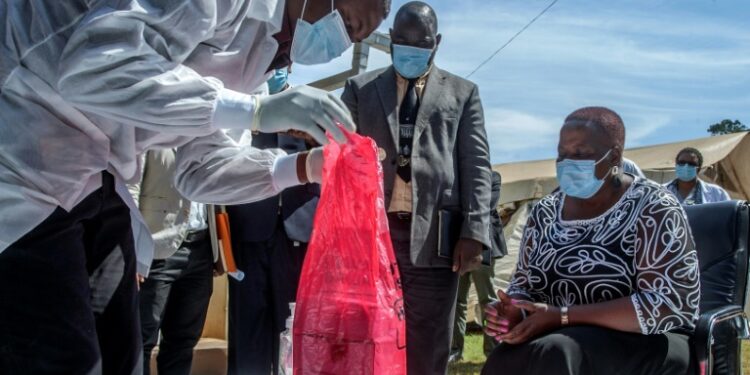 A batch of AstraZeneca from the AU had just a two-week shelf life, Health Minister Kumbize Kandodo, right, noted as the doses were incinerated | AFP

Malawi on Wednesday destroyed nearly 20,000 doses of the AstraZeneca vaccine that had expired in mid-April, with the health minister blaming “propaganda” for many Malawians’ reluctance to receive the jab.

“The batch which had expired (has) been withdrawn from our system and has been destroyed,” Health Minister Kumbize Kandodo said at the Kamuzu Central Hospital in the capital Lilongwe.

“We are destroying (these vaccines) because as government policy no expired health commodities are to be used,” she said.

“Historically under the expanded immunization program of Malawi no expired vaccine has ever been used.”

We are destroying publicly in order to stay accountable to Malawians. The vaccines that expired are not being used during the vaccination campaign,” she said.

“On behalf of the government, I assure all Malawians that no one will be given an expired COVID vaccine.”

The southern African country has so far received three batches of the AstraZeneca vaccine — 300,000 doses under the Covax vaccine sharing facility, 50,000 from India and 102,000 from the African Union.

Kandodo said the African Union batch had “two weeks of shelf life, and unfortunately, in those two weeks, we were not able to absorb everything, mostly due to the propaganda against the AstraZeneca vaccine.”

Austria this week became the third European country to drop AstraZeneca, after Norway and Denmark ditched the vaccine over rare cases of severe blood clots in people receiving the jab.

Kandodo said Wednesday: “We tried to assure Malawians and give them the faith” but wound up with 16,910 unusable doses of AstraZeneca, incinerated in a brief ceremony at the hospital.

Since Malawi launched its vaccination drive in March, it has inoculated 300,000 people of its target to reach 11 million, or 60 percent of the population, by the end of the year.

“We don’t want to lose any vaccine because we have a lot of people to vaccinate but… we have to remove all expired drugs from the system,” Kandodo said.

“Any vaccine that has passed its expiry date … should not be administered,” said WHO in a statement dated May 17.

“While discarding vaccines is deeply regrettable in the context of any immunization program, WHO recommends that these expired doses should be removed from the distribution chain and safely disposed.”

WHO said that in March, the African Union’s African Vaccine Acquisition Task Team redistributed 925,000 doses of the AstraZeneca vaccine produced by the Serum Institute of India with an expiry date of April 13 to 13 African countries. “The bulk of these vaccine doses were administered, but some countries have unused doses remaining,” said the WHO statement.

“We had stopped observation of proper storage mechanisms and the vaccines would have still been damaged in one way or the other,” he said.

The destruction of the vaccines was witnessed by several top officials “in order to enhance transparency,” health secretary Charles Mwansambo said.

Malawi will still have adequate stocks of COVID-19 vaccines in both public and private health facilities, he said. The government has not said where it will get more vaccines.

Malawi, like many other African countries, has relied on the AstraZeneca vaccine that has been distributed by COVAX and the African Union. But now supplies of the vaccine have become more scarce because India, the main supplier of vaccines to COVAX, has stopped exports until it has adequately vaccinated large numbers of its population of 1.4 billion people.

The Serum Institute of India says it hopes to start delivering coronavirus vaccines to COVAX and to other countries by the end of the year.

The delay will significantly set back global efforts to immunize people against COVID-19. India’s Serum Institute is the world’s biggest vaccine-maker.

The company said in March that it was postponing all exports of coronavirus vaccines to deal with the explosive surge of cases on the subcontinent.

At the time, the World Health Organization said it expected COVID-19 vaccine deliveries from India to resume by June and the interruption would affect about 90 million doses.

Government Not Responsible For High Cost Of Living – Oguna

Author who fled ‘torture’ in Uganda arrives in Germany