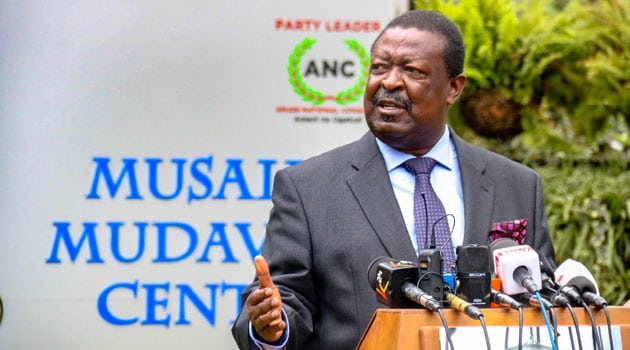 The ANC party has unveiled over 1,800 candidates who will be running for various positions across the Country in the August elections.

The candidates were presented with their nomination certificates on Monday at the Amani National Congress party headquarters in Nairobi by party leader, Musalia Mudavadi.

“The nominations are now behind us and the real work of winning in the August elections now starts. Be our party’s ambassador. Our party slogan is peace and I urge you all to maintain peace as you hit the ground,” Mudavadi said as he congratulated the candidates.

Mudavadi challenged the candidates to hit the ground running and popularize their bid and that of the party.

“Be bold and aggressive as you sell your candidature on the ground and endeavor to build your personal brands through strategic engagement with the media,” he said.

The number of candidates is the highest ever for the party since it was formed in 2015.

Mudavadi said 14 candidates will fly the party’s flag for the governorship, including in far far-flung counties like Wajir County, Lamu and Marsabit.

Other counties that the party will be fielding candidates for the governorship include Mombasa, Kirinyaga, Murang’a, Tana River, Taita Taveta, Garissa and Bomet. Others are Nyamira, Kakamega, Vihiga and Busia.

Mudavadi who is one of the Kenya Kwanza principals, hailed the candidates for their resilience and urged them to remain steadfast as they sell the Kenya Kwanza and ANC party ideals during the campaign period.

He further urged the aspirants to reach out to their colleagues who lost in the nominations and co-opt them in their campaign teams. He also urged them to ensure all their papers are intact ahead of the IEBC submission deadline.

“We must work hard to have governors, MPs, senators and MCAs. That is the only way we will make our party vibrant and a force to reckon with, and have many nomination slots at both national and county assemblies,” he said.

Trump Nervous He Might Be Indicted If He Loses