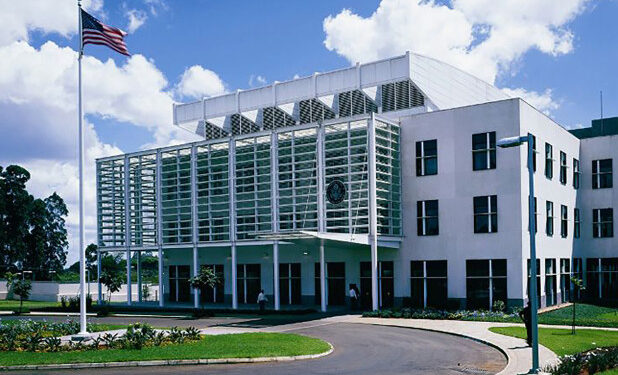 312
SHARES
3.3k
VIEWS
Share on FacebookShare on TwitterShare on WhatsApp

The body of a Senior American officer posted at the U.S Embassy in Nairobi was found on Wednesday in his hotel room, in what Kenyan and American officials believe to be a suicide, according to a report.

Police and witnesses said the body of the 58-yr old man was found in his hotel room near the Village Market after he failed to report to work after arriving in the country, only a couple of days ago.

Witnesses said he apparently used a belt, according to the local outlet.

“The body was found hanging near the room window. He seemed to have died long before security arrived there…”

A suicide note found near the bed will be investigated.

Embassy officials checked on him after he failed to show up for work to relieve a colleague and failed answer his cellphone; his room has to be broken into, as it was locked from the inside.

“We can confirm the death of a US government employee. US Embassy Nairobi extends its deepest condolences to the family and loved ones of the deceased…” Embassy rep.

The U.S State Department did not immediately respond to a request for comment by us.

As of now, the matter is being investigated by detectives from the U.S Embassy Diplomatic Police Unit (US DPPU) and the Directorate of Criminal Investigations (DCI).

Nassir To Challenge Postponement Of Mombasa Polls In Court