During his exit address, Chebukati claimed that he resisted attempts by the State to overturn the August 2022 presidential results 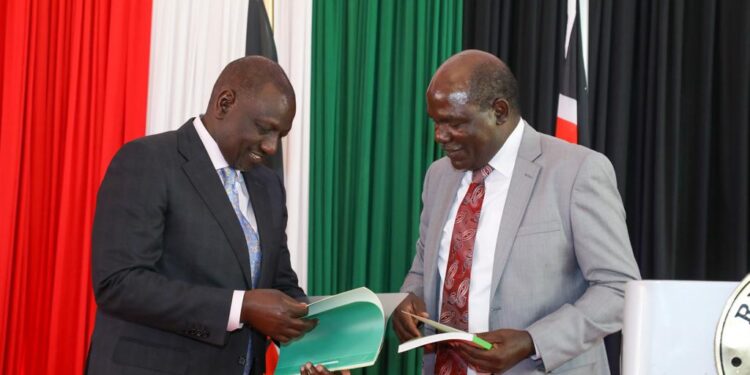 Speaking on Tuesday during a meeting with Constitutional Commissions and Independent Offices at the State House, Nairobi, Ruto lauded Chebukati for defending the constitution and resisting threats.

“That is what integrity looks like when working for the people of Kenya; standing with the Constitution, braving pressure and resisting threats.”

Ruto said Constitutional Commissions and Independent offices are integral to the prosperity and stability of Kenya.

The institutions, he said, are essential to Kenya’s democracy and their leadership is critical factor in their success.

“The promise of our Constitution is partly dependent on the integrity and vigilance of Commissions and independent offices. They are the auditors of the auditors; they watch over the watchmen.”

The meeting was aimed at inaugurating a collaborative plan between the Executive and Commissions and Independent Offices towards the full implementation of the Constitution.

During his exit address as the IEBC chairperson, Chebukati revealed that he had braved so many threats during last years polls.

On Tuesday, during the meeting, President Ruto claimed that there were live plans to abduct and murder Chebukati during last year’s electioneering period.

Chebukati called on President Ruto to form a commission of inquiry to look into the chaos that rocked the National Election Results Tallying center at the Bomas of Kenya on the day the presidential results were announced.