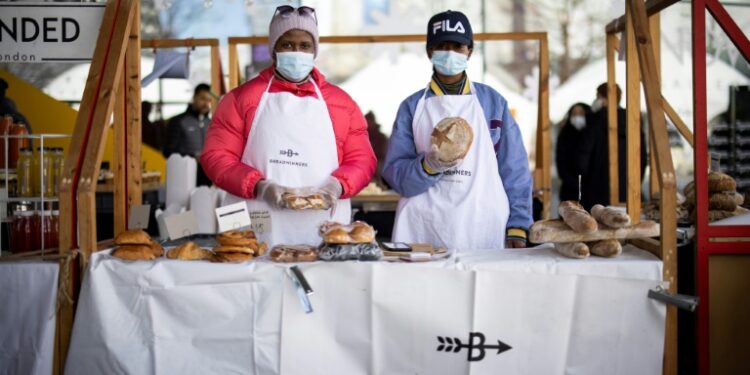 Breadwinners has helped 208 refugees, the vast majority of whom have gone on to university or to find paid employment | AFP

Eritrean asylum seeker Hanna Araya sells freshly baked bread during the lunchtime rush at a London market — as she waits to see if she can remain in the UK.

For six months, the 19-year-old has volunteered for Breadwinners, a charity offering asylum seekers and refugees work experience and paid employment on their market stalls across London and in nearby Brighton.

“It’s really (been) a big impact for me, because it’s been challenging to get here and to get the first job in the UK,” Araya told AFP of the opportunity provided by Breadwinners, whose slogan reads “Fresh Bread, Fresh Start”.

“So now I have confidence, I would love to work in the future, maybe to be a nurse or radiologist,” she said from the stall in Greenwich, south London.

In Britain, an asylum seeker who is allowed to remain permanently in the country obtains “refugee” status, in turn enabling them to gain paid work.

At the end of September, Britain had nearly 84,000 outstanding cases for refugee status, up 41 percent year-on-year, the latest official data showed.

Founded in 2016, Breadwinners has helped 208 refugees, the vast majority of whom have gone on to university or to find paid employment.

Over the past decade, UK sandwich chain Pret A Manger has hired refugees from Eritrea, Ethiopia, Iran, Sri Lanka and Yemen.

“There are so many things’ refugees can bring to a company, from hard work… to infectious smiles,” said Alice Sloman, a manager at Breadwinners.

The war in Ukraine has resulted in millions of new refugees seeking sanctuary elsewhere in Europe.

Only around 12,000 Ukrainians have arrived in the UK since the start of the war owing to a slow administrative process compared with other countries.

“At the moment we haven’t employed any Ukrainian refugees, but we welcome everyone to join our programme, regardless of which country they were born in,” said Sloman.

“We would love to have Ukrainian refugees and asylum seekers join our team.”

Some major UK employers have publicly said they are willing to take on Ukrainians fleeing their country, including food-to-clothing retailer Marks and Spencer, supermarket Aldi, mobile phone group Vodafone and accountants PwC.

Bread & Roses, an NGO helping women refugees become florists, said it had noticed a difference in how the West had welcomed Ukrainians compared with other nationalities fleeing their homes — including from Syria — and has called for equal treatment.

“We support the speed and openness with which Ukrainians are being welcomed to seek sanctuary,” it said in a statement.

“But we believe that this should be the rule, rather than the exception, for how we treat refugees.”

Some sectors in the UK, notably hospitality and logistics, are struggling to fill vacancies following Brexit and after people switched jobs during the pandemic.

Official data Tuesday showed record overall vacancies in Britain, while wages are being eroded by the highest UK inflation in decades.

Breadwinners’ own programmes help asylum seekers and refugees to polish their English and to prepare for job interviews.

Refugees can also get their first paid job with Breadwinners awaiting employment elsewhere.

“Breadwinners has helped me with improving my customer service skills,” said Vanessa Nwosu, a Nigerian working alongside Araya to sell sourdough and cereal bread.

“It’s also helped me in learning about confidence.

“How to treat people and stuff like that… Now I know how to smile and talk to people, so it’s really helped me in that aspect,” added the 29-year-old, who hopes to work for a non-governmental organization.

You Thrive On Graft, You Can’t Fight It: DP Ruto to Raila

DMX’s life will be honored at two livestreamed memorials. Here’s how to watch both

Akothee Vows to Sire for New Lover, Asks Fans to Call Her a Dog If She Fails