Your sacrifice will not go unrewarded, Ruto tells Mudavadi 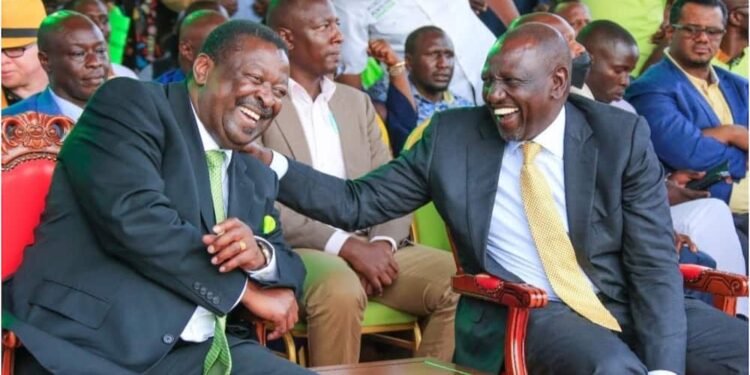 He said when threats, intimidation and blackmail were being directed at leader, the two stood firm and decided to join him.

Ruto, while expressing confidence that the alliance will form the next government, said together with the duo and other leaders from Central Kenya, he was certain of victory.

Seemingly trying to ignore the elephant in the room on what positions they were going to hold in his administration if the alliance wins in August, Ruto singled out Mudavadi, saying his sacrifice was going to pay off.

“In Musalia you have a solid leader. This is a man whom some individuals have taken for granted because of his stand, but I want to tell you that he is a man who can sacrifice himself for the good of the people,” the DP said.

“It is very rare to find such leaders who work for the benefit of the people. He is ready to make sacrifices when needed…my friend, your sacrifice for the good of Kenya is going to pay off in our lifetime…huyu mungwana atapata malipo yake hapa duniani (this gentleman is going to be rewarded).”

Ruto, who spoke during an economic empowerment meeting in Vihiga, said they formed the alliance not because of selfish interests but because of the good of the nation at large.

While heaping praise on Mudavadi and Wetang’ula, the DP said they are forthright leaders who are not after their own selfish interests.

He asked the leaders and residents present at the event to support the duo, promising them goodies once they triumph.

Ruto said leaders in Azimio team are only focused on meetings on how to share positions instead of finding solutions to the problems bedevilling Kenyans.

“The difference between us and our competitors is like day and night. Today we have come here to discuss issues of economic development and our people,” he said.

In what was an interactive session with residents, Ruto said that if elected in August, his government will set aside Sh50 billion yearly for table banking for traders. Each constituency will get Sh200 million and Sh50 million per ward.

The funds, he said, will be loaned to traders from the kitty at ward level. They will repay at a rate of three per cent.

Mudavadi said his agreeing to work with Ruto was not in any way about personal gains but, “what my people will get in the next government”

“I want to sacrifice so that the people of Western can benefit, it is not about personal gains,” he said.

Mudavadi said together with Wetang’ula, they have the capacity to go for the presidency but chose to unite to achieve their goals.

“Ruto has no history of betrayal, selfish interests or lying. We cannot say the same for others, outright lies and backstabbing is the order,” he said.

Wetang’ula said the Luhya community had cut ties with Raila and that by August they will send him home by voting in Ruto as the fifth president.

“This a house that we have all built together, others brought timber while others came with iron sheets, so they remain in it and walk together…we have formed and made the correct choice, a choice that will make you all feel part of Kenya,” he said.

The team will be in the region through to Sunday holding similar meetings with residents and the business community.

Present during the function were a host of elected leaders and MCAs.

Meet Secretlyjuly, Rising Kenyan Songstress Set to Take Over the World with Her Sonorous Vocals