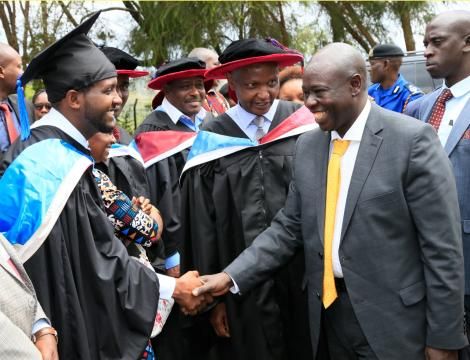 While speaking at the Outspan Medical College graduation in Nyeri County on Saturday, November 19, the DP accused the media of sensationalizing information about the happenings in Kenya Kwanza coalition.

Moreover, Gachagua stated that the alleged disagreement following the just concluded East African Legislative Assembly (EALA) elections should not be deemed as a sign of discord among the members.

Gachagua noted that it should be seen as an expression of their freedom to vote for the candidates of their choice.

“There was a minor problem…there was a little issue in parliamentary elections which has nothing to do with the president and myself…wabunge walikuwa wanakosana, which is normal. The president being a democrat, allowed them to do whatever they want,” he said.

“The matter has been sorted, elections have taken place and we have moved on. Ruto is a democrat and is allowing internal democracy within his government. When you see a few of our MPs arguing over this and that, it does not mean there is any problem…we are all behind the president.” He added.

Gachagua further asked the media not to create a problem where there is none.

Regarding Nyeri Governor Mutahi Kahiga’s remarks on Kenya Kwanza MPs being left out in the EALA slots, DP Gachagua said, “I want to correct you governor, nilisikia jana umesema mambo ya arusi… our marriage between the president, ourselves and the rest of Kenyans was a result of a long courtship. We courted each other, loved each other and saw that we could live together.”

DP Gachagua went ahead to woo Azimio MPs in the Mount Kenya region, vouching for President Ruto’s leadership, and promising to facilitate developments.

“We are going to unite the mountain behind President Ruto because he means well for us. The people who voted for Ruto were 87%, 13% wakapotea wakaingia Azimio,” he said.

Likewise, the second in command urged the Mt Kenya business community which was supporting the Azimio One Kenya outfit during elections to rally behind the government

“…The 13% has been reaching out and we have already opened the doors…let everybody from this region come and join William Ruto so that we foster development. Mt Kenya Foundation, our businesspeople, professionals who had been misled please come and join Ruto,” stated the DP.