by Anthony Wrightstone
in Formula 1, Sports
0 0
0 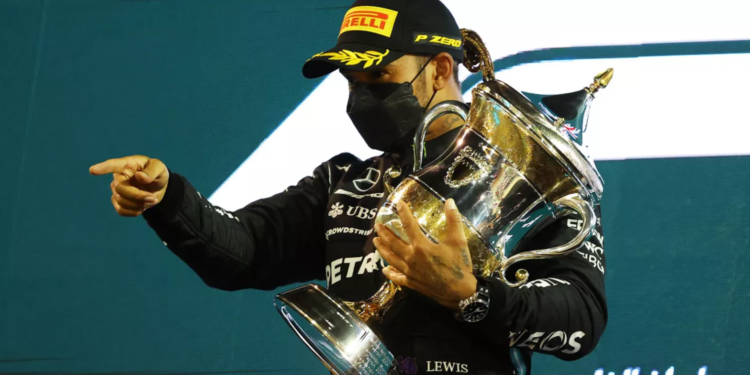 Red Bull’s Max Verstappen started from pole at the season-opening Bahrain Grand Prix but Mercedes went for the undercut and Lewis Hamilton emerged from the first stop in front.

Verstappen came out after the final stops trailing by eight seconds, he hunted him down but Hamilton held on. Fernando Alonso’s return to Formula 1 lasted 34 laps, before retiring with brake issues.

Lewis Hamilton held on for a dramatic victory in the first race of the F1 season, denying Max Verstappen after an exhilarating finish to the Bahrain Grand Prix.

The Dutchman had caught the eye during testing and practice, clinching pole in Saturday’s qualifying, but Hamilton managed his tires expertly to win the opening race of the season for the first time since 2015.

A series of pit stops saw Verstappen chase down Hamilton over the final 16 laps and the Red Bull looked to have passed the world champion coming out of turn two with only a few laps remaining.

However, Verstappen was forced to give Hamilton the position back having passed the Mercedes off the track, violating track limits, and was unable to draw close enough to the seven-time world champion to get another opportunity.

Valtteri Bottas finished on the podium while Lando Norris crossed the line in fourth and Sergio Perez in fifth after the Mexican fought through the field having started the race from the pit lane.

DRIVER OF THE DAY – LEWIS HAMILTON (MERCEDES)
There were a number of standout drives in the opening race of the season with Norris and Perez deserving of a mention, but Hamilton showed why he is the one with the target on his back here. Mercedes burned through their tires quicker than Red Bull, but Hamilton managed to pull out a lengthy 27-lap stint on a worn-out set of hard compounds to finish the race. He had to get his elbows out at times, but the world champion earned this victory after much doubt about Mercedes’ pace and reliability through pre-season.

WHERE THE RACE WAS WON
29/56 – Hamilton on to another set of fresh tires! Mercedes are keeping Red Bull guessing with their strategy here. Hamilton is on to a new set of hard tires, so is this a three-stop strategy for the world champion?
40/56 – Verstappen in and out! A sub-two second pit stop! A fantastic pit stop from the Red Bull crew and Verstappen is out behind Hamilton. This race would now appear to be in the Dutchman’s hands. How will Hamilton manage his tires? Can he possibly go to the end of the race on them? 16 laps to go!
52/56 – Verstappen into the lead! The Red Bull was off the track when he took the position and so Hamilton will surely complain to race control about that! That was magnificent racing from the two, but Verstappen has the lead now with just a few laps to go!
52/56 – HAMILTON LEADING AGAIN! Verstappen has given the position back to Hamilton as Red Bull clearly feel he was off the track when he took the position and would have been punished. He’s going to have to have another go of this! Drama! This is what we wanted.
Hamilton wins the Bahrain GP! What an incredible drive! Exceptional from Hamilton! Verstappen looked destined to win this race, but the world champion got his elbows out and was somehow able to manage his tires for 27 laps to the end of the race. What a duel that was!

Best Overtake of the Day
Technically, the best overtake of the day was performed by rookie Yuki Tsunoda who was late on the brakes to pass Fernando Alonso at the midway point of the race, but the most exhilarating pass saw Carlos Sainz, Sebastian Vettel and Alonso all swap positions over the course of just two corners with the current Ferrari man taking P8 from the two former Ferrari drivers.

Best Pit Wall Challenge of the Day
“If I do that I won’t get to the end of the race,” Hamilton replied to Bono when his race engineer had instructed him to pick up the pace for the final 20 laps. This illustrated the balance Hamilton had to strike. The Mercedes could have found greater pace, but the issue was tire degradation. The race itself was encapsulated in this exchange.

Suicide bombing in Somalia town kills 14 on eve of vote

DP Ruto Presents Himself Before UDA Executive Committee for Vetting