by Walter Kinyua
in Cricket, Sports
0 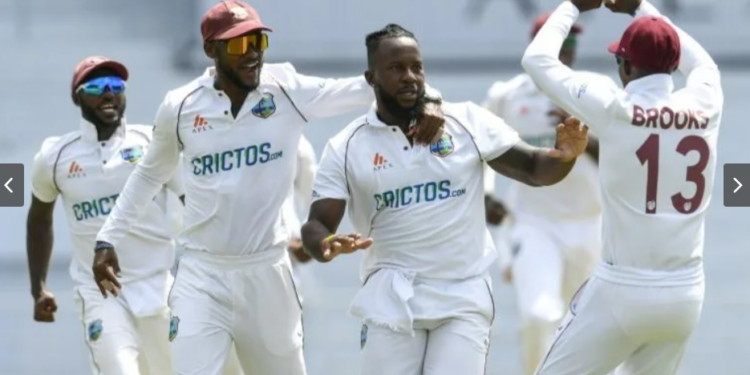 Kyle Mayers was the unlikely destroyer of England’s second innings with a first-ever five-wicket haul to put the West Indies on the verge of a series-clinching victory on the third day of the third and final Test on Saturday.

After Joshua da Silva’s maiden Test century extended the home side’s first innings to 297 through the entire morning session for a lead of 93 runs, Mayers produced the astonishing figures of five for nine off 13 overs as England tumbled to 103 for eight by the close of play.

It leaves the tourists in a hopeless position of only 10 runs ahead with just two wickets in hand and two days to play.

Whether overnight batsmen Chris Woakes and Jack Leach can provide any sort of meaningful resistance on the fourth morning together with last man Saqib Mahmood, as has been the pattern so far in this Test match, remains to be seen.

“Today has not been right but a lot of what we’ve done in the first two Tests has really been good, and the team has produced some great performances, so let’s not judge it just on today that it’s not working,” said England batting coach Marcus Trescothick.

However, the harrowing experience of the day’s play was a stark reminder that the demons of an abysmal Ashes campaign are far from exorcised in the England ranks.

Having made his mark in the first innings with the first two wickets of the match on Thursday, Mayers’ deceptive medium pace was again almost unplayable on a surface offering an increasingly uneven bounce.

As on day one, he accounted for England captain Joe Root before adding Dan Lawrence and all-rounder Ben Stokes in quick succession to leave the visitors tottering at 39 for four in mid-afternoon.

Opening batsman Alex Lees and Jonny Bairstow offered the only respite in a partnership of 41 but when Bairstow bottom-edged an attempted pull off Alzarri Joseph to wicketkeeper da Silva it was the trigger for the first post-tea collapse of the match as four wickets fell for 21 runs.

Ben Foakes was run out by Mayers’ throw from the deep to da Silva coming back for a second run and Mayers scattered the stumps of the patient Lees for a top score of 31 before Craig Overton offered a catch high to Jason Holder’s right at second slip.

“I think the key was making the batsmen play as much as possible because of the variable nature of the surface and the straighter deliveries were certainly working for me,” said Mayers.

Seales, who played his part in a 52-run last-wicket stand with da Silva in the morning session, made the early breakthrough when Crawley drove at a full-length delivery and Holder seemed to surprise himself by holding on to the fizzing chance at second slip.

This all too familiar capitulation only worsened England’s mood.

Resuming at 232 for eight, any thoughts of a swift finale to the West Indies first innings when Kemar Roach fell to Mahmood were extinguished by the resistance of Jayden Seales.

Guided through the partnership by his fellow Trinidadian, Seales coped creditably with the deliveries he was required to face to the extent of stroking a four and six in getting to 13 off 59 deliveries.

His eventual demise came as the culmination of a period of celebration, chaos and confusion as the determined da Silva inched towards three figures, notwithstanding the negative leg-side tactics of the England bowlers.

His improvisation in response proved so effective that he then accelerated from 80 to the coveted century mark by swatting a succession of boundaries off left-arm spinner Leach and fast-medium bowler Overton.

His tenth boundary, played like a two-fisted forehand through mid-on, triggered celebrations by da Silva and Seales as the 23-year-old savored his first hundred in Test cricket.

He was then given out caught behind off Overton and even though he reviewed the decision, da Silva was almost in the players’ dressing room when the television replays confirmed he was not out and he rather sheepishly returned to the middle, followed by the increasingly disgruntled England players.

They did not have to wait much longer for the end of the innings though with Seales falling in the next over bowled by Root, leaving da Silva unbeaten in an effort spanning almost six hours in which he faced 257 deliveries.

“I can’t even properly explain what it means to get this hundred,” was da Silva’s reaction to his effort.

“I got 92 in Bangladesh a year ago and was devastated to miss out then, so to get a hundred here — it is a dream come true.”

Akinwumi Adesina: Why the US is targeting a flamboyant Nigerian banker