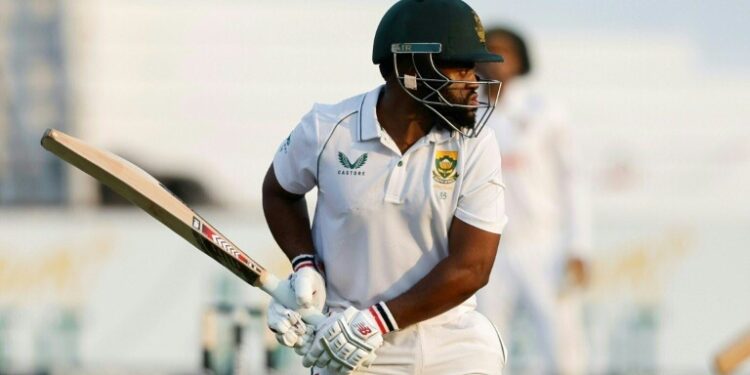 526
SHARES
4.5k
VIEWS
Share on FacebookShare on TwitterShare on WhatsApp

Temba Bavuma’s long wait for a second Test century continued when the South African vice-captain was bowled for 93 on the second day of the first Test against Bangladesh at Kingsmead on Friday.

South Africa were 314 for eight at lunch.

Bavuma made 102 not out against England in Cape Town in January 2016 in his seventh Test match. He is currently making his 50th appearance and has scored 18 half-centuries without adding another three-figure score.

Bavuma batted through a tricky period for South Africa on Friday as Bangladesh bowled well with the second new ball on a pitch which appeared to have quickened up since the first day.

Khaled Ahmed made a double strike when he had Kyle Verreynne palpably leg before wicket for 28 with a ball which nipped back and kept low, then had Wiaan Mulder caught by a diving Mahmudul Hasan Joy at gully off the next ball.

South Africa were 245 for six, having added only 12 runs to their overnight total, but Bavuma and Keshav Maharaj added 53 runs for the seventh wicket as Bavuma moved closer to his hundred.

But Bavuma attempted a cut against off-spinner Mehidy Hasan. The ball spun back sharply and deflected off Bavuma’s pad into the stumps. He had faced 190 balls and hit 12 fours.

Maharaj fell off the next ball when he was bowled for 19 by Ebadot Hossain.

Kivutha Kibwana Says Kalonzo Musyoka is the Problem in Azimio

EU halting military training in Mali but staying in Sahel