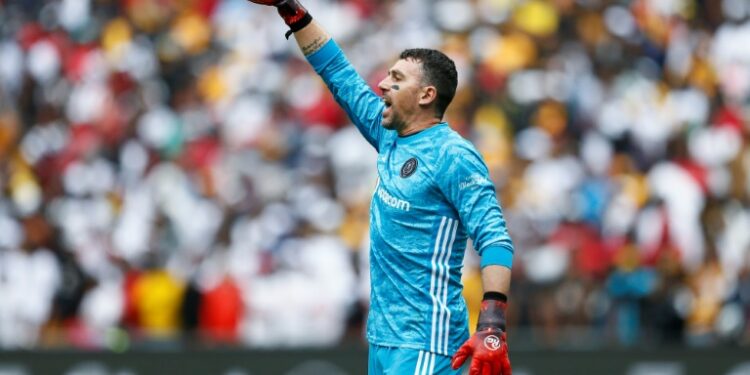 Cyril Olisema scored in stoppage time on Thursday to lift Enyimba of Nigeria from last to first in a CAF Confederation Cup group, and secure a quarter-finals place.

The goal earned Enyimba a dramatic 1-0 home win over Orlando Pirates of South Africa in a Group A clash of former African champions in southeastern city Aba.

Until Olisema netted for the second time in the CAF campaign, his club were lying fourth behind Pirates, Entente Setif of Algeria and Al Ahly Benghazi of Libya.

He won the match by firing a cutback past South African goalkeeper Wayne Sandilands, who had earlier defied Enyimba with a string of superb saves.

The match-winner raised the Nigerian outfit to nine points, the same total as Pirates, and they topped the final standings on head-to-head records.

Setif, who were poised to qualify until Olisema struck, finished third with eight points after beating Benghazi 1-0 through a second-minute own-goal from Ali Alqmati in Algeria.

The qualification of Enyimba and Pirates completed the line-up for the quarter-finals and semi-finals draws on Friday in the African equivalent of the UEFA Europa League.

Raja Casablanca of Morocco secured a place after matchday 4 and JS Kabylie of Algeria, Coton Sport of Cameroon, Jaraaf of Senegal, CS Sfaxien of Tunisia and Pyramids of Egypt secured places one matchday later.

Enyimba, Kabylie, Jaraaf and Raja will go into one pot in Cairo as group winners with Pirates, Coton, record three-time Confederation Cup winners Sfaxien and Pyramids in the other.

First time
Sfaxien and Raja are former winners of the competition, Pirates and Pyramids have been runners-up and Coton and Enyimba semi-finalists.

Six-time CAF title winners Kabylie have reached the knockout stage for the first time along with Jaraaf, the first Senegalese club to achieve the feat.

Quarter-finals and semi-finals are played over two legs, with group runners-up having home advantage first, before a single-match final at a venue to be announced.

Kabylie needed maximum points at home to NAPSA Stars of Zambia to be sure of topping Group B and survived the 80th-minute red-carding of Rezki Hamroune to win 2-1 in Tizi Ouzou.

Mohamed Benchaira starred for the Algerians, scoring the first goal and creating the second for Kouceila Boualia before Emmanuel Mayuka snatched a last-minute consolation goal for NAPSA.

Title-holders Renaissance Berkane of Morocco bowed out with a 2-1 win over Coton with a fifth goal of the campaign from Lambert Araina coming too late after the hosts built a two-goal lead.

Jaraaf exceeded expectations by holding Sfaxien to a 0-0 Group C draw in Tunisia while two-time Confederation Cup winners Etoile Sahel of Tunisia won 2-1 at home against Salitas of Burkina Faso.

Raja completed Group D with a 100 percent record and six clean sheets by defeating Nkana of Zambia 2-0 in Morocco while Pyramids edged Namungo of Tanzania 1-0 in Cairo.

Because many players are observing a dawn-to-dusk fast during the Muslim holy month of Ramadan, most of the matches kicked off late on Wednesday and finished on Thursday.