Marseille down Saint-Etienne to retake second in Ligue 1 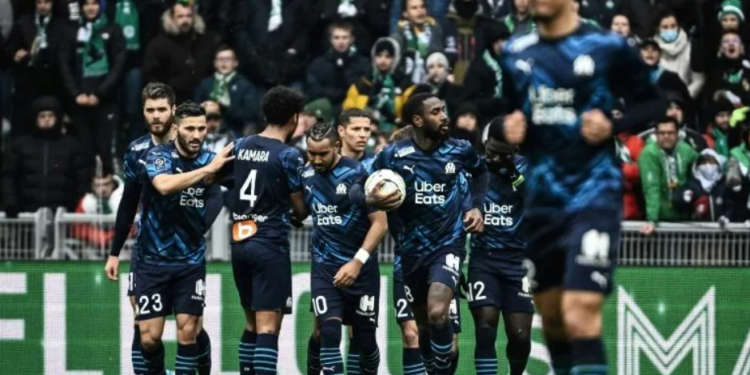 987
SHARES
5.7k
VIEWS
Share on FacebookShare on TwitterShare on WhatsApp

Marseille reclaimed second place in Ligue 1 on Sunday with a 4-2 win at Saint-Etienne in a game that was rescheduled following heavy snowfall in parts of France.

Dimitri Payet and Bamba Dieng scored penalties either side of a comical own goal from Saint-Etienne defender Timothee Kolodziejczak before Amine Harit added a fourth for Marseille.

“We saw total domination from Marseille. It’s an important victory but we need to fight until the end,” said Marseille coach Jorge Sampaoli.

“We can’t ease off and we’ll need to perform well when it’s more difficult.”

Denis Bouanga had given Saint-Etienne the lead at a sold-out Stade Geoffroy-Guichard after a mistake by Marseille goalkeeper Pau Lopez.

Lucas Gourna grabbed a late consolation for the hosts, who remain in the relegation play-off spot but are still just one point from safety.

The match was pushed back from Saturday after freezing temperatures and snow made access to the ground difficult.

“The postponement was difficult to manage, mainly because we didn’t know what time we were going to play,” said Sampaoli.

“It’s not normal that there is so much uncertainty around a Ligue 1 match.”

Marseille are three points clear of Rennes while Strasbourg climbed above Nice into fourth courtesy of a 1-0 victory at home to Lens.

Ludovic Ajorque scored the only goal from the penalty spot as Strasbourg extended their unbeaten run to eight matches.

Ajorque notched his 11th goal of the season, and first in almost three months, after a cross struck the arm of Poland international Przemyslaw Frankowski.

Strasbourg won another penalty when Ajorque was fouled by Lens goalkeeper Jean-Louis Leca, but Kevin Gameiro’s spot-kick was saved.

They moved ahead of Nice on goal difference after Christophe Galtier’s side were held 1-1 at home against Rennes on Saturday.

Strasbourg are two points behind Rennes.

Brazilian winger Tete struck two minutes into his Lyon debut to give his new side a 3-2 home win over Angers.

The 22-year-old joined Lyon this week for the rest of the season from Shakhtar Donetsk following the invasion of Ukraine by Russia.

FIFA has allowed Ukraine-based players to temporarily suspend their contracts and move to other clubs.

Moussa Dembele twice gave Lyon the lead, but Angers replied through goals from Mathias Pereira Lage and Sofiane Boufal, with Tete curling in the winner 10 minutes from time.

Leaders Paris Saint-Germain have a nine-point cushion at the top of the league before their match later Sunday at relegation-threatened Lorient.