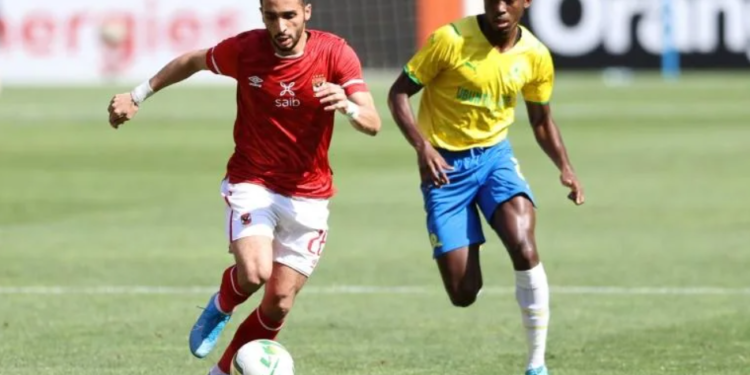 782
SHARES
5.6k
VIEWS
Share on FacebookShare on TwitterShare on WhatsApp

Peter Shalulile scored a hat-trick as Mamelodi Sundowns moved within 10 points of a record-extending fifth straight South African Premiership title by winning 4-2 at Swallows on Wednesday.

The 28-year-old Namibian struck twice within five minutes to give the Pretoria club an early two-goal advantage over their lowly opponents in Soweto.

When Swallows netted a minute from time and reduced the deficit to a single goal, Shalulile responded immediately by scoring off a rebound to put the outcome beyond doubt.

He has scored 18 Premiership goals this season — four more than closest rival Vincent Letsoalo from Royal AM — and 24 in all competitions.

“Success at Sundowns is about brotherhood — we are always helping each other,” Shalulile said after scoring his first hat-trick of the 2021-2022 campaign.

“Swallows may be second last in the table, but this was never going to be a stroll in the park. They never gave up and threatened to snatch a draw until I completed my hat-trick.

“We treated them with the same respect as any other opponents. Our preparations were thorough, analyzing every aspect of Swallows. We noted where they were strong and weak and planned accordingly.”

Sundowns led second-placed Royal AM by 11 points and 10 from their remaining six matches will ensure the trophy remains in the boardroom where it has been on display since mid-2018.

They face Golden Arrows and Cape Town City at home and Sekhukhune United away before a potential title-clinching clash with Kaizer Chiefs in Soweto on May 8.

Sundowns’ widest title-winning margin is 14 points in 2016 and co-coach Manqoba Mngqithi says that is one mark they hope to improve on this season.

The club are chasing a “quadruple” at home and abroad — a feat a club owned by Confederation of African Football (CAF) president Patrice Motsepe have not achieved in the past.

They won the MTN 8, a knockout competition reserved for the top eight finishers in the previous Premiership, early this season and have reached the Nedbank (FA) Cup quarterfinals.

But what Sundowns crave most is winning the CAF Champions League a second time after defeating Zamalek of Egypt in the 2016 title decider.

Sundowns face Angolan outfit Petro Atletico in the quarterfinals this month and, if successful, meet Chabab Belouizdad of Algeria or Wydad Casablanca of Morocco during May for a place in the final.

While the South Africans should overcome Petro, likely semi-final opponents Wydad have been a bogey side for Sundowns, winning four and drawing two of eight previous Champions League meetings.

Kenya’s Lamu Port was meant to deliver great things. But, as the story of local fishermen shows, it hasn’t