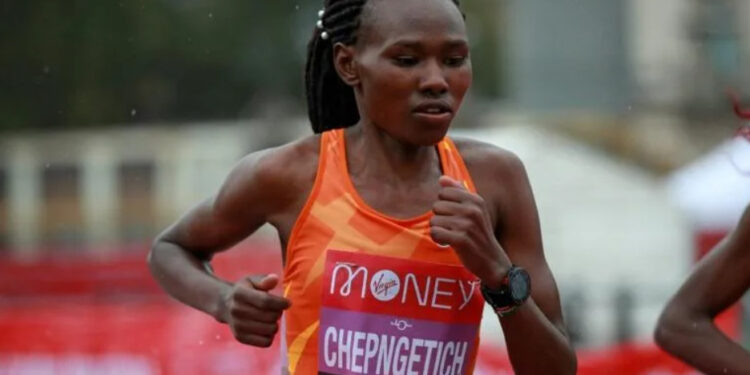 Reigning world champion Ruth Chepngetich of Kenya captured the women’s crown in her US Chicago marathon debut, while Ethiopia’s Seifu Tura won the men’s title on Sunday at the 43rd Chicago Marathon.

The 26.2-mile event was canceled by Covid-19 last year, but runners were back after 728 days on a flat course through the streets of the “Windy City” in warm and breezy conditions.

“I’m very happy to have won here in Chicago,” Tura said. “I prepared for more than three months for this race. If it hadn’t been for the heat, I was hoping to run a personal best time.”

Chepngetich grabbed the lead from the start and won for the fifth time in six marathon starts in 2:22:31, defeating American runner-up Emma Bates by 1:49 with American Sara Hall third in 2:27:19.

“The race was good, but it was not easy,” Chepngetich said. “I pushed alone from the 10k. The weather was nice. I believed in myself, and I was fortunate, and I pushed myself.”

By 10km, Chepngetich had stretched her lead over Kenyan Vivian Kiplagat, who finished fifth, to 27 seconds with no one else within two minutes.

She moved past a male pacer after 40 minutes, reached the midpoint in 1:07:34, 76 seconds ahead of Kiplagat, and was comfortably ahead to the end.

“I just pushed myself,” Chepngetich said. “I didn’t look back. I just pushed forward to the finish line. I was feeling strong, but I could feel it in my legs.”

Chepngetich, 27, set a world half-marathon record of 1:04:02 in April at Istanbul and her marathon best of 2:17:08 to win at Dubai in 2019 makes her the fourth-fastest woman in history at the distance.

Spectators lined the downtown streets as a lead pack of 11 opened a quick gap in the men’s race, trimming to seven after 10km.

The seven were together at the halfway mark at 1:02:29 and stayed tight until just before mile 24 when Tura, Rupp and Kiptanui picked up the pace.

Tura surged again starting the 25th mile to open a gap on his nearest rivals and Rupp could not overtake him down the stretch.

“I just didn’t quite have it at the end,” Rupp said. “He ran an unbelievable race.”

Chicago 2017 champion Rupp, who was third at the Rio Olympics and eighth at the Tokyo Olympics, called the result “a step in the right direction”.

Kenya at the UN Security Council: managing the constraints while building consensus

After floods, S.Africans wait hours for water amid fear of disease

Parliament To Resume Sittings After A One Month Recess