by Walter Kinyua
in Rugby, Sports
0 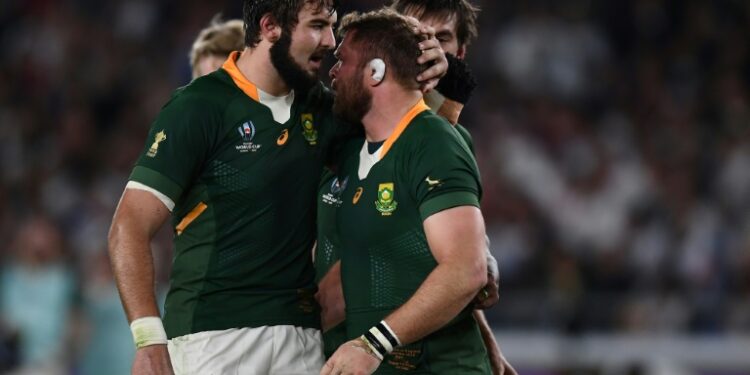 South Africa on Tuesday postponed naming the team to play Georgia this weekend after the 44-strong squad were placed in self isolation when lock Lood de Jager tested positive for coronavirus.

“Media are advised that the Springbok team announcement scheduled for Tuesday has been postponed until further notice,” a South African Rugby statement said.

“The entire squad had tests on Tuesday morning and will remain in isolation until the results and subsequent recommendations are received from the medical advisory group.”

It is the second time the Springboks have been forced to isolate at their suburban hotel with wing Sibusiso Nkosi and prop Vincent Koch testing positive last weekend.

South Africa defeated Georgia 40-9 last weekend in their first match since winning the 2019 Rugby World Cup final in Japan with all 13 Tests scheduled for last year cancelled due to the pandemic.

They are due to play Georgia again on Friday in preparation for a three-Test series against the British and Irish Lions, starting in Cape Town on July 24.

The Lions play the Sharks in Johannesburg on Wednesday, but doubts have been cast over whether their match against the Bulls in Pretoria on Saturday will go ahead as several of the home squad have tested positive.

Johannesburg and Pretoria are situated in the Gauteng province, the epicenter of a third wave of coronavirus in South Africa.

By Monday night, there had been 2,075,409 recorded cases and 62,171 deaths in the African country most affected by the pandemic.