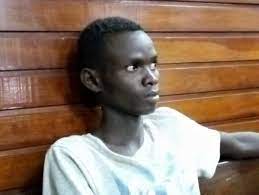 A 22-year-old man has been charged in a Mombasa Court for performing unnatural acts on a goat.

Shadrack Musyoka Mulwa appeared before and pleaded not guilty to the charges.

The mentioned was accused of the act witnessed in Shelly beach area in Likoni, Mombasa County on November 14.

The suspect was allegedly caught in the act by the animal owner (complainant) who had hired him to graze the animals.

The suspect was arrested and escorted to Shelly Beach police station, from where he was charged in court.

Mutuku ordered the accused to be released on a Ksh100,000 surety bond with an alternative cash bail of Ksh50,000.

“Give the Youth Jobs You Promised During Campaigns" - Gaucho Tells Govt'

Thug Gunned Down in Kayole