Cops Drop To Knee Before Protesters 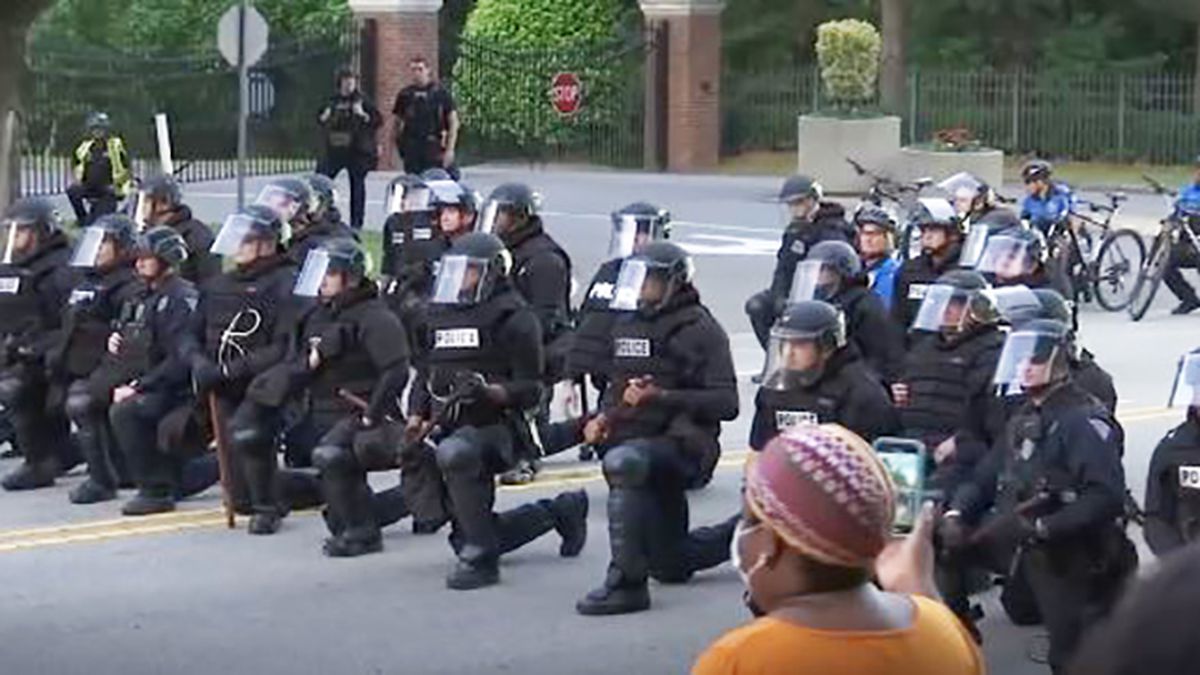 Tense protest turns emotional as 60 North Carolina police kneel before demonstrators. Police in Fayetteville, North Carolina, made a surprising move Monday during a tense standoff with protesters seeking justice in the case of George Floyd, who died after being restrained by police in Minneapolis.

A group of about 50 police in Fayetteville, North Carolina, showed their support for Civil Rights protesters by kneeling in the streets before marchers on Monday. BY FAYETTEVILLE POLICE DEPARTMENT

Police in Fayetteville, North Carolina, made a surprising move Monday during a tense stand off with protesters seeking justice in the case of George Floyd, who died after being restrained by police in Minneapolis.

All 60-plus officers knelt before the marchers on Murchison Road.

Video of the moment had been viewed more than 14,000 times on Twitter and got 15,000 reactions on Facebook as of Tuesday morning.

“As a show of understanding the pain that is in our community and our nation regarding equality, the #FayPD took a knee to show that we also stand for justice for everyone,” the department wrote. “We are committed to listening and treating everyone with dignity and respect.”

Witnesses say some officers and protesters responded to the move with tears.

As a show of understanding the pain that is in our community and our nation regarding equality, the #FayPD took a knee to show that we also stand for justice for everyone. We are committed to listening and treating everyone with dignity and respect.#LoveONE pic.twitter.com/X5KAQohN6g

“The protesters first got mad when asked to step back, but once the officers knelt down, it was on. Men and women alike started crying and then cautiously came toward the police officers to shake their hands,” Mimamo Monika posted on Facebook.

“These are moments that will go down into history and will be taught to future generations.”

Instances of police kneeling and even hugging protesters have been reported sporadically around the nation as protesters have demanded changes in the way law enforcement interacts with black people, McClatchy News reports.

A single officer was cheered by protesters after kneeling over the weekend in Lexington, Kentucky, and a line of city officers holding shields knelt in front of demonstrators Monday in Atlanta, CNN reported.

Police in Fayetteville, the home of Fort Bragg, have come under fire in the past days for a slow response to violent protests Saturday, the Fayetteville Observer reports. Buildings were damaged and stores looted, the newspaper said.

Such acts of violence and looting have been carried out by smaller groups during mostly peaceful — and lawful —gatherings and marches, authorities say. The vast majority of the protesters across the nation have been “peaceful demonstrators calling for change,” law enforcement officials told ABC News.

Fayetteville was under a curfew Monday, with no vehicles or pedestrians allowed into uptown from 8 p.m. to 6 a.m. Tuesday.

Social media reacted to the dozens of officers taking a knee was largely one of gratitude. Some called it a sign of respect, while others called it a “show of leadership.”

“That was a moment that made the entire community happy,” SouthernEmpress tweeted.

“You have restored my faith in the idea that EVERYONE here is aware of a systemic issue. Thank you to the police for keeping the peace, and thank you to the protesters who strive to make their voices heard. You were heard,” Rebecca Peters wrote on Facebook.

“This had me in tears,” Sharon Jones posted on the department’s Facebook page. “My heart has been aching, but this really warms it to see such humanity displayed. U are teaching an entire Human Race how we should conduct ourselves.”