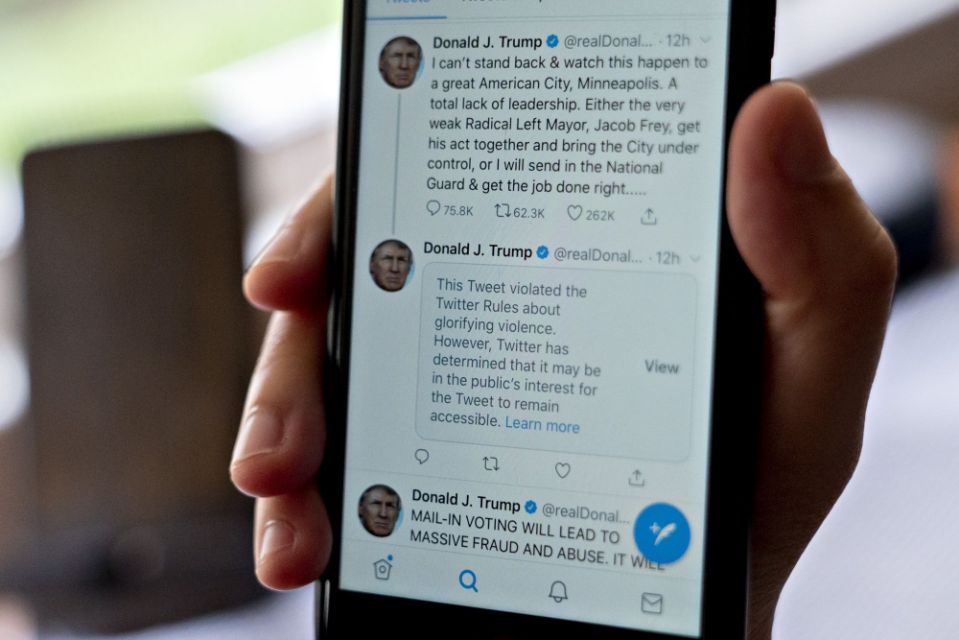 A tweet hidden with a rule-violation notice that includes the phrase "when the looting starts, the shooting starts" by U.S. President Donald Trump is displayed on a smartphone in an arranged photograph taken in Arlington, Virginia, U.S., on Friday, May 29, 2020. Tensions between Twitter Inc. and Trump soared after the social-media platform warned users that the president broke its rules against violent speech, prompting critics to accuse the company of unfairly censoring one of its most prominent users.

As the U.S. president, Donald Trump receives special treatment from Twitter Inc. when he violates the company’s rules around offensive or misleading content. That exemption is coming to an end in January 2021 if he loses the presidency.

The social network treats transgressions from world leaders differently than those from regular users, and often leaves up tweets that violate its content policies, adding a warning instead of forcing users to delete the posts.

This is part of Twitter’s philosophy that people should be able to hear from world leaders even when they share controversial posts because their messages are inherently newsworthy.

But former world leaders aren’t protected under that policy. High-profile politicians no longer in office — like former U.S. President Barack Obama — are treated like regular users if they violate Twitter’s rules, which prohibit messages that include hate speech or posts that glorify violence or contain certain types of false information, like dangerous health-related misinformation.

Trump will fall into the “former” group if he leaves office in January, Twitter confirmed. If that happens, breaking one of Twitter’s rules means his tweets may be removed entirely instead of labeled. He could also rack up “strikes” for multiple violations, which would increase the severity of punishment issued from the company, and could lead to temporary account freezes, suspensions or even a permanent ban.

With Joe Biden on Thursday closing in on the 270 electoral votes he needs to win the presidency, Trump’s path to re-election has narrowed, though he is mounting legal challenges in several states.

Since the polls closed Tuesday night, Twitter has hidden eight separate Trump tweets for violating the company’s rules, most of them for trying to undermine the validity of election results by suggesting vote tallies are fraudulent and that Democrats are trying to “steal” the presidency.

Typically, numerous rules violations in a short period of time would lead to more severe punishment from Twitter, like an account freeze or temporary suspension. In Trump’s case, all eight tweets were hidden behind a warning label, but were still visible to users who clicked through to view them.

Despite the high number of violations in a short time, Trump didn’t accumulate strikes against his account for these violations, according to a person familiar with the company’s enforcement policies. World leaders can receive strikes for egregious rules violations — like promoting terrorism or a clear threat of violence — which would result in tweets being removed. But world leaders do not collect strikes for rules violations if a tweet is left up and labeled, said the person, who asked not to be identified discussing internal policies.

The warning labels Twitter applies do appear to reduce a tweet’s spread. In one example from earlier this week, a Trump tweet that was hidden by Twitter was receiving hundreds of retweets and replies per minute before it was flagged, according to data from the Election Integrity Partnership, a research group. Tweets that are hidden behind a warning label can’t be retweeted without a comment and can’t be liked.

“A critical function of our service is providing a place where people can openly and publicly respond to their leaders and hold them accountable,” a Twitter spokesman said in a statement. “With this in mind, there are certain cases where it may be in the public’s interest to have access to certain tweets, even if they would otherwise be in violation of our rules.”

Trump has arguably been one of the most contentious and polarizing Twitter users of all time. As president, he has often pushed the boundaries of acceptable speech on the platform, putting Twitter employees in the tricky position of deciding how to police such a highly visible user without facing claims of censorship.

Part of the company’s solution was its world leader’s policy, and what it calls a “public interest interstitial” — a warning label hiding offending tweets and diminishing their reach specifically for accounts run by elected politicians and other world leaders. “It’s preserving a record of what is said in the public interest,” said Vijaya Gadde, Twitter’s top lawyer, earlier this year.

That tool sat dormant for months and wasn’t used on Trump until May. San Francisco-based Twitter hid a Trump tweet behind a warning screen after he posted “when the looting starts, the shooting starts,” a violation of the company’s policy against glorifying violence.

Twitter has since flagged Trump’s tweets for rules violations with more regularity, though company officials have never suspended or frozen his account.

If Biden prevails, it isn’t clear what Trump’s Twitter feed will look like, or how the company will ultimately treat him as a private citizen. His posts before his 2016 campaign included the same abrasive, controversial language that they do today, but as a businessman and reality-TV star, he had far fewer followers — and less influence — than he gained once he became a presidential candidate.

– This article first appeared on Bloomberg

‘We Are All Set,’ OKA Coalition Principals Say As They Sign Coalition Deal