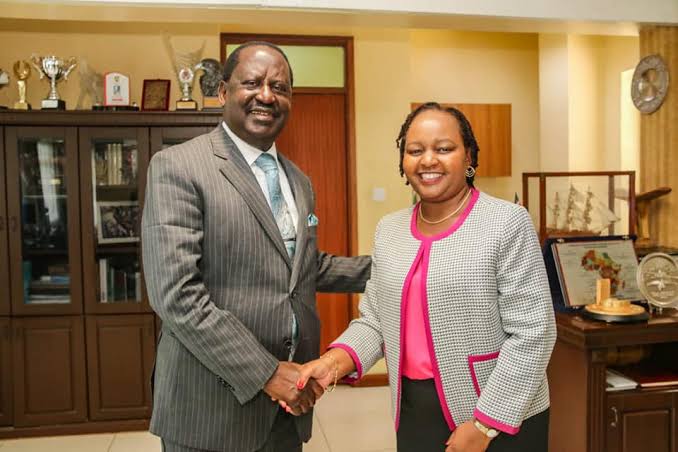 Embattled Kirinyaga Governor Anne Waiguru has succumbed to requesting former Prime Minister Raila Odinga for help, following an imminent impeachment motion that is yet to be debated at the senate.

The duo met on the evening of Thursday, June 11th, at a fancy club in Karen with the main agenda reportedly being an appeal to the Orange Democratic Movement (ODM) leader to convince his allies to water down the motion – This is according to one of the local daily reports.

Quoting a source that took part in the organisation of the meeting, the publication further indicated that Waiguru was confident with the Kieleweke wing of Jubilee Party in defeating her motion.

She noted that she had also reached out to a number of Jubilee Party allies and needed the help of Raila Odinga to retain her job.

Waiguru arrived for the meeting a few minutes before 7 PM, and was joined by the former PM a few minutes later. The meeting is said to have lasted for more than two hours, ending shortly past 9 PM.

The pair were joined by Kiambu Governor, James Nyoro, and his Nyeri counterpart Mutahi Kahiga.

It is not rocket science what the meeting was about. She wants to be saved at the Senate. He (Raila) was with his close allies and I don’t need to name names,” stated the source.

The report further indicated that State House might have changed its stance on how it views the impeachment largely after Kirinyaga Woman Representative Purity Ngirici’s assertion that the tussle was between Tangatanga and Kieleweke.

“Waiguru has lots of enemies including in high places. There are those that do not mind if she goes home. However, framing the war as being Tangatanga vs Kieleweke by Ms Ngirici was not wise,” another source stated.

So far, the county boss has suffered two blows since her impeachment was put in motion when 23 of the 33 MCA’s in the county voting for her removal while only six abstained.

The embattled Governor had then, on Tuesday, June 9, obtained a court order to block the County Assembly from impeaching her but it was disregarded.

Waiguru claimed that the impeachment was unlawful because the High Court had temporarily stopped assembly proceedings over COVID-19.

Justice Weldon Korir declined to overturn the impeachment of the Kirinyaga governor ruling that the Kirinyaga MCA’s didn’t violate any court order and ordered her to cater for the costs of the suit.

Her fate is now in the hands of the Senate after Speaker Kenneth Lusaka on Wednesday, June 10th, confirmed receiving her impeachment resolution.

However some of the lawmakers in the senate on their social media platforms questioned the legality of the Kirinyaga county assembly to debate on the impeachment motion despite a court order that barred them from debating on the motion until directed otherwise.

An exercise which Senate minority chief whip Mutula Kilonzo termed as contempt of court and disrespect to the constitution and to the judiciary.

Tears, Anger at Burial of Class 8 Girl in Kisii Who Was Electrocuted to Death