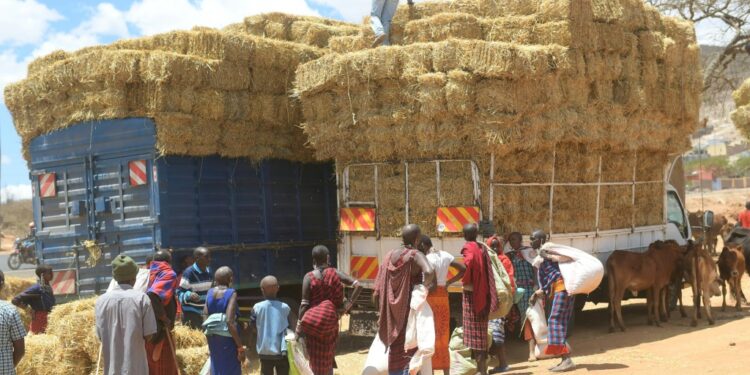 Maasai women affected by a worsening drought buy barley straw for their animals at a livestock market in Kenya: IMAGE/AFP

It is being billed as the “African COP” but scientists and campaigners on the continent least responsible for climate change fear the UN summit that begins on Sunday in Egypt will once again leave them sidelined.

As the toll of climate-linked disasters mounts in debt-ridden countries across Africa, governments are demanding that rich polluters pay for the harm their emissions have already caused, known as “loss and damage”.

“Historically, Africa is responsible for less than four percent of global emissions, but Africans are suffering some of the most brutal impacts of the climate crisis,” said Ugandan campaigner Vanessa Nakate.

“We need financial support to cope with the loss and the damage we’re experiencing across the continent. We need polluters to compensate for the destruction they’ve caused.”

Richer governments rejected a call for a financial mechanism to address losses and damage at last year’s climate talks in Glasgow and instead negotiators agreed to start a “dialogue” on financial compensation.

But as floods, heat waves and droughts sweep across the planet, hitting the most vulnerable hardest, activists are hoping the issue will take centre stage at COP27 in Egypt.

In Africa alone, extreme weather events have killed at least 4,000 people and displaced 19 million so far this year, a study by the Carbon Brief news service said last week.

The ongoing drought in East Africa is impacting the livelihoods of more than nine million people, and 1.4 million people have been displaced in recent weeks in the worst floods on record in Nigeria.

The UN’s Intergovernmental Panel on Climate Change in February warned that tens of millions of Africans face a future marked by drought, disease and displacement due to global heating.

Chukwumerije Okereke, a professor in environment and development at Britain’s Reading University, said that African nations would demand greater action from the polluting countries that are driving climate change.

“African countries believe they have been significantly shortchanged because they are the most vulnerable to the impact of climate change,” he told AFP.

“Ultimately, the best way to stave off a more devastating impact of climate change on the continent is through rapid decarbonisation.”

Countries agreed at last year’s UN climate talks in Glasgow to raise the ambition of their emissions-cutting plans. However, the UN says those additional measures would result in a pollution cut of less than one percent by 2030.

The Glasgow summit also produced a new strategy for financing the energy transition, with a group of rich nations committing to providing $8.5 billion to coal-dependent South Africa over three to five years — in grants and loans — to help its climate plan and catalyse private investment.

This week the World Bank said that South Africa, one of the world’s largest greenhouse gas emitters, will require at least $500 billion to achieve carbon neutrality by 2050.

Susan Chomba, director of the African NGO Vital Landscapes, said governments should use COP27 to push green development investment on the continent.

“We do need development for our people and we need to use the resources that are within our reach on the continent,” she said.

“The war in Ukraine has exposed the naked risk of overdependence on fossil fuels, even for the richest economies, but also the ripple effect that it is having on energy fertiliser and food prices on the continent.”

Progress at recent COPs has been stymied by a failed promise by rich nations to provide at least $100 billion annually to developing ones to help decarbonise while adapting to climate impacts.

“The key point that I’m really looking forward to is that COP27 is going to be a COP where we’re going to be able to build up trust,” said Ineza Grace from the Loss and Damage Youth Collaborative.

“All of those fake promises have never been accomplished and we are the generation that is kind of living in the hotspot. But we are also a generation that does not want to sit down and just continue to be victims.”

“So poor countries should be aware that while having a facility is a victory, it may not necessarily translate to more dollars coming to them.”