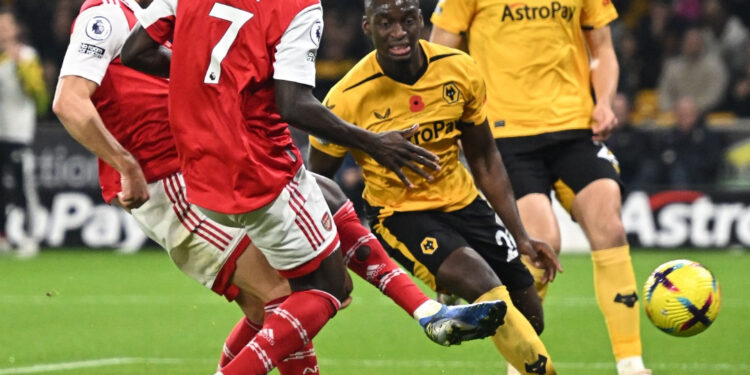 Martin Odegaard is Arsenal's top scorer this season after his two goals against Wolves: IMAGE/Arsenal

Arsenal will take a five-point lead at the top of the Premier League table into the World Cup break after a Martin Odegaard brace secured a 2-0 victory over Wolverhampton Wanderers at Molineux on Saturday.

.@Arsenal move five points clear at the 🔝 of the table!#WOLARS pic.twitter.com/KFeMKCGTEN

Odegaard broke the deadlock 10 minutes into the second half before the Arsenal captain added a second in the 75th minute to give his side their 12th win in 14 league games to start to the season.

They now have a healthy cushion over second-placed Manchester City, after the champions suffered a shock 2-1 loss at home to Brentford earlier in the day.

It means Arsenal will be top of the table on Christmas Day for the first time since the 2007-08 season as they chase their first title since the undefeated Invincibles season of 2003-04. Ten of the last 13 teams to be top at Christmas have gone on to win the title.

“We have to stay calm. We’ve said many times it’s a long way to the end of the season, there are some good teams around us, we’ll play every game as a final,” Odegaard said.

In a battle of top against bottom, Arsenal were made to work hard for all three points against a well-organized Wolves side playing in front of new manager Julen Lopetegui, who will officially take charge on Monday.

But the former Sevilla, Real Madrid and Spain coach will take the reins with his new team four points from safety after their eighth defeat from 15 matches.

Caretaker manager Steve Davis said he was happy with Wolves’ first-half game plan in soaking up pressure then launching counter-attacks.

“In the second half we conceded two goals. Other than that, fantastic,” he added. “He [Lopetegui] watched tonight and has probably been pleased with a lot of aspects.”

The game began worryingly for Arsenal when Granit Xhaka, set to be part of Switzerland’s squad at the World Cup, went down in discomfort in just the second minute. While the midfielder elected to play on, he lasted only until the 16th minute before being replaced by Fabio Vieira.

Arsenal manager Mikel Arteta said after the game that Xhaka was suffering from a stomach illness, seemingly easing any fears about his participation in Qatar.

After a quiet first half that failed to produce an effort on target for either team, the substitute would go on to play a major role in breaking Wolves’ resistance.

At the end of a well-worked move, Vieira ran onto a pass slipped down the side of the Wolves defense from Gabriel Jesus. The Portuguese midfielder did well to take out Wolves goalkeeper Jose Sa with a chipped ball across the face of goal that left Odegaard with a simple tap-in to an unguarded net.

Against a Wolves side that offered precious little attacking threat and had managed just eight Premier League goals all season, the opening goal was always going to be crucial. And when Odegaard pounced to grab his second, and sixth league goal of the campaign, the match was effectively over as a contest.

Oleksandr Zinchenko was instrumental, driving to the byline before firing in a dangerous cut back that found its way to Gabriel Martinelli via a deflection. Sa did well to block the Brazilian’s shot with his legs but could do nothing as Odegaard lashed home the rebound.

“We know the quality we have, we know we are going to create chances, we had to be patient, but it came good,” Odegaard added.

“We played a bit slow in the first half. They defended well, with all the players behind the ball. I think we did better the second half, we played the ball out wide and created some overload, and we got the goals, so I think it worked.”