The consortium, which includes Vodafone and Vodacom, paid $850m for the license, officials say

by Monica Chang
in Business, Technology
0 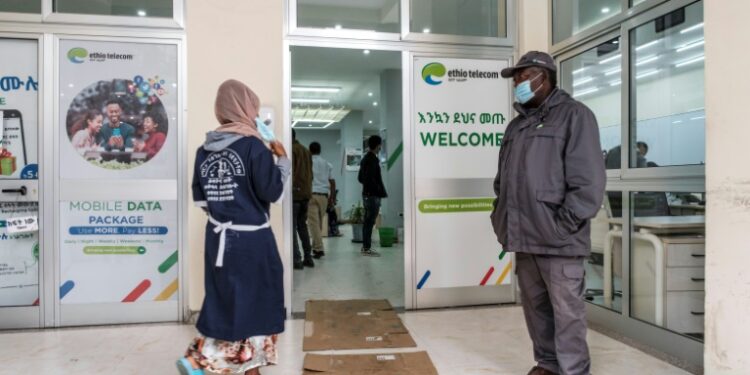 Ethiopia has granted an operating license to a consortium of firms including Kenya’s Safaricom, Vodafone and Vodacom, officials said Saturday, a move that will end the state’s monopoly over its stunted telecoms sector.

Abiy, who is running for a new term in hotly anticipated national elections next month, hailed the news on Twitter Saturday, saying the consortium’s bid “offered the highest licensing fee and a very solid investment case.”

He said the consortium would bring the largest infusion of foreign direct investment in Ethiopia to date, and that “our desire to take Ethiopia fully digital is on track.”

Abiy’s government planned to award two new telecoms licenses, but in late April it announced it had received only two bids after some firms that initially expressed interest — including France’s Orange and the UAE’s Etisalat — opted not to submit.

The second bid of $600 million from South Africa’s MTN was “not enough” and was therefore “rejected”, Brook said.

Balcha Reba, director general of the Ethiopian Communications Authority, told AFP that the second license would soon be re-tendered.

Risk factors
Ethiopia is currently mired in a six-month-old conflict in its northern Tigray region, and tensions are running high with Sudan and Egypt over issues including disputed border territory and Ethiopia’s massive dam on the Blue Nile River.

These factors might have discouraged some firms from bidding for a license, said Chiti Mbizule, analyst at Fitch Solutions.

“Although operators tend to take a more long-term view of the markets they are looking to enter, for the more risk averse players, it can’t be ruled out that the political and economic outlook could play some role in their decision to hold off entering the market at this stage,” Mbizule said.

Some companies might have also been put off by a central bank directive that had prevented foreign-owned firms from providing mobile financial services.

At the launch ceremony, Abiy said Ethio Telecom would have one year to develop the service without competition, indicating other providers could soon get involved.

The new telecoms licenses are expected to bring an infusion of cash, jobs and infrastructure investment.

The consortium that has now been granted a license is set to create up to 1.5 million new jobs and bring $8.5 billion in investment over 10 years, Brook said.

It will provide 4G and 5G internet services, and by 2023 a low-orbit satellite will be put in place to provide nationwide 4G coverage, Brook added.

“This is a great day for us and we’re very much excited,” he said.

Ethiopia’s telecoms reforms also include a plan to sell a stake in Ethio Telecom, a move officials hope will make the firm more efficient.

Rampant Raja stronger away from Morocco in CAF Confederation Cup