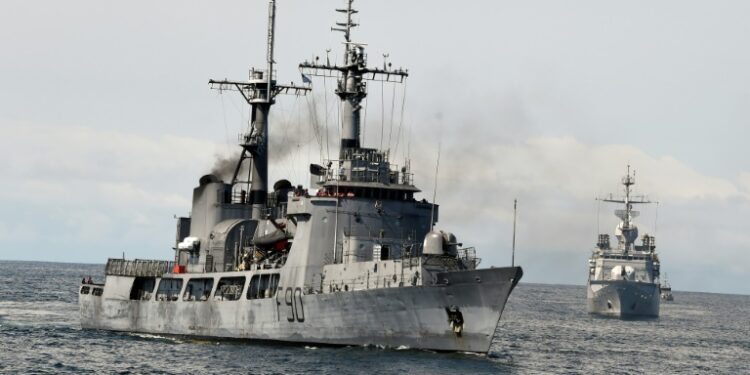 Major international shipping and maritime companies have called for a coalition to combat piracy in the Gulf of Guinea, where armed kidnappings of seafarers reached record levels last year.

A key shipping route stretching from Senegal to Angola, the Gulf of Guinea has seen pirates, mostly Nigerians, attacking farther out to sea in more sophisticated, violent assaults on commercial ships.

A group of around 100 shippers, maritime companies and trade associations have signed a declaration released on Monday calling for more cooperation to curb piracy in the region, which accounted for almost all maritime abductions in 2020.

“The threat that looms for all seafarers going to the region is being kidnapped at gunpoint for ransom,” said the declaration, which was developed in online meetings by signatories from Europe, China, Japan, India and Turkey.

“The violence, scope, and sophistication of the attacks on shipping has continued to increase.”

Signatories include some of the world’s largest shipping companies and associations including industry group BIMCO, Denmark’s TORM and Maersk Tankers, Germany’s Hapag-Lloyd and Chinese transporter COSCO.

Several EU nations already often have naval vessels in the area, but pirate gangs are increasingly attacking beyond Nigeria’s coastal waters, where they know ships are more vulnerable.

Naval presence
Denmark, a major shipping nation, in March said it will dispatch a naval frigate with dozens of marines onboard to deter pirate attacks on commercial ships there.

Denmark has been pushing for a stronger international naval presence in the Gulf of Guinea, where pirates race in speed boats out of bases hidden in Nigeria’s Delta region to snatch crews from vessels.

“We recognize the important steps taken and positive initiatives underway by coastal States in the region,” Monday’s declaration said, referring to Nigeria and its neighbors.

“We call on all stakeholders to… join together in a coalition to end the threat of piracy in the Gulf of Guinea.”

The statement called for more cooperation among local and other naval forces, capacity building and intelligence sharing, as well as measures to take on and arrest criminal gangs onshore.

The Gulf of Guinea accounted for more 95 percent of global maritime kidnappings last year — 130 out of 135 cases, according to the International Maritime Bureau (IMB), which monitors security at sea.

“We are calling on the international community to put a plan in action to stop these rising incidents of piracy.”

In one of the incidents this year, 15 crew members were kidnapped in March from a Dutch-based De Poli tanker off the coast of Benin. They were released in April more than a month after they were snatched.

“You feel so helpless when something like this happens to one of your ships and its crew,” Chiara de Poli, chief executive of De Poli tankers, told AFP.