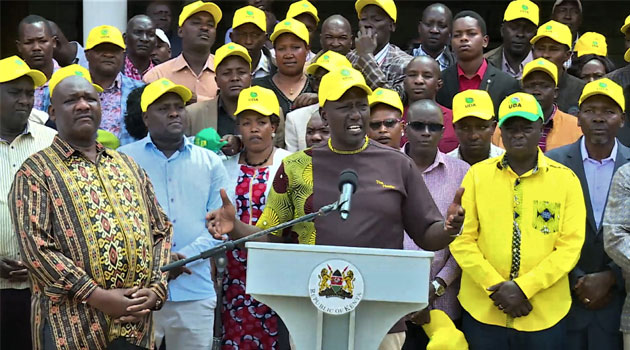 Narok County Governor Samuel Ole Tunai has decamped to the United Democratic Alliance (UDA) party ahead of the August Pols.

Mr. Tunai who was formerly a member of the Jubilee Party, made the move on Friday.

The Governor intimated that his move was attributed to his belief in DP Ruto’s presidential candidacy and his ultimate plan for the country.

“We firmly believe that you are the right person to take this country to the next level. I totally believe in your agenda for this country and the people of Kenya,” Tunai said.

“Because we believe in continuity, we decided that I go for the Senate seat and I’m requesting the people of Narok to elect me as their Senator and Patrick Ntutu as the governor.”

William Ruto lauded the move by Tunai, as he exuded confidence in clinching the presidency come August.

“I want to commend Tunai as governor for his endeavour to work together with all the communities and bringing on board all the communities. Sasa team yetu ya Narok imekamilika na tuko tayari katika uchaguzi unaokuja,” said the DP.

The heated race in the county to succeed Tunai will now feature former CAS Patrick Ntutu and Narok North MP Moitalel ole Kenta who is running on an ODM party ticket.

Twin attacks in Somalia kill 48 ahead of vote

Raila Says He Went To Heal In Zanzibar