Footballer makes protest by taking a knee in Bundesliga 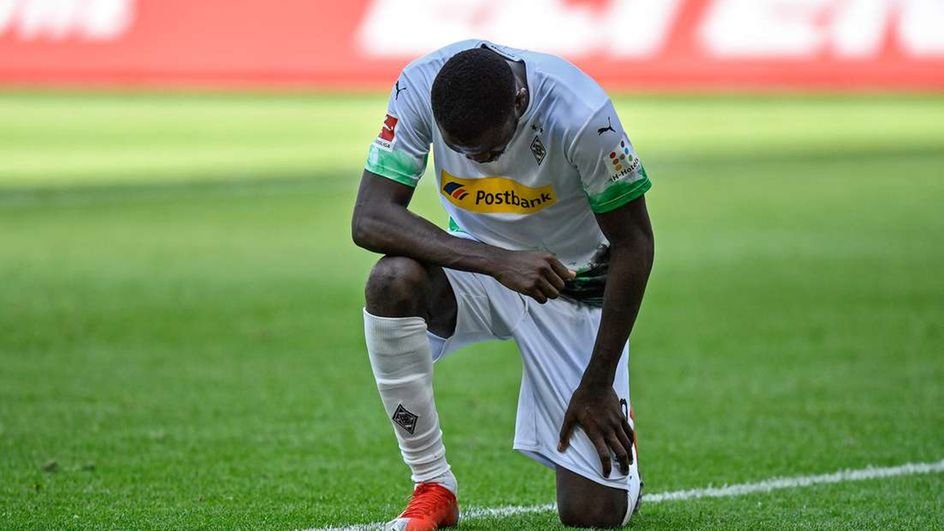 BERLIN – In the Bundesliga on Saturday, Schalke’s US midfielder Weston McKennie wore an armband against Werder Bremen bearing the words “Justice for George”. “To be able to use my platform to bring attention to a problem that has been going on to long feels good!!!” he tweeted.

Marcus Thuram joined an array of sporting personalities in protesting racism in the United States when he took a knee after scoring for Borussia Moenchengladbach in the Bundesliga on Sunday.

Thuram’s gesture echoed past protests by National Football League players in the US in support of the Black Lives Matter movement.

The issue has surged back into the headlines following the death of George Floyd in Minneapolis.

Thuram’s gesture was the second protest in the Bundesliga this weekend.

Because of social distancing rules, goal celebrations were muted but after Thuram headed his team’s second goal just before half time he took the opportunity to make a solitary statement, kneeling and bowing his head.

At half time, his club tweeted a photo with the caption: “No explanation needed.”

After the game, Gladbach coach Marco Rose said Thuram had his backing.

“Marcus has made the point. He has set an example against racism that we all support,” Rose said.

Thuram, whose father, French World Cup winner Lilian runs the Education against Racism foundation in Paris, was the latest show of solidarity with the current protests sweeping the United States.

In the Bundesliga on Saturday, Schalke’s US midfielder Weston McKennie wore an armband against Werder Bremen bearing the words “Justice for George”.

“To be able to use my platform to bring attention to a problem that has been going on to long feels good!!!” he tweeted.

On Saturday, in the United States, NFL Commissioner Roger Goodell said there “remains an urgent need for action” as violent protests rocked the country.

“The protesters’ reactions to these incidents reflect the pain, anger, and frustration that so many of us feel,” Goodell said. “As current events dramatically underscore, there remains much more to do as a country and as a league.”

“I drove 15 hours to get to Georgia, my community,” Brown said. “Being a celebrity, being an NBA player, don’t exclude me from no conversations at all. First and foremost, I’m a black man and I’m a member of this community.”

NBA star LeBron James was among those who contrasted pictures of police officer Derek Chauvin’s knee on Floyd’s neck with the kneeling protests of former NFL star Colin Kaepernick in 2016.

Kaepernick, who was ostracized by the NFL for kneeling during the national anthem in protest against racial injustice, has launched a fund to pay for legal representation for protesters who need it.

Serena Williams tweeted a video by Nike, which also sponsors Kaepernick, picking out the line: “Don’t pretend there’s not a problem in America.”

“To be able to use my platform to bring attention to a problem that has been going on too long feels good!!!” the 22-year-old tweeted.

On Instagram, rising US tennis star Coco Gauff, a 16-year-old African American, showed the faces of black Americans who died in recent years at the hands of authorities or white fellow citizens.

Kenya court remands 16 in custody over road attack on woman