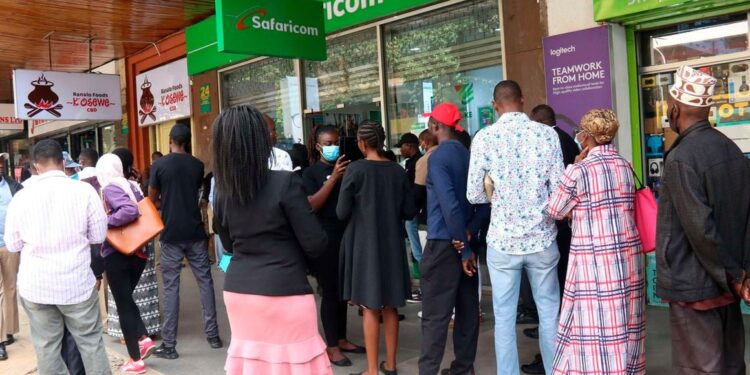 City residents queue outside a Safaricom shop along Kimathi street, Nairobi on April 7, 2022, in a rush to beat the sim registration deadline: IMAGE/Courtesy

The High Court in Kenya has granted millions of Safaricom subscribers the opportunity to join a class action lawsuit against the telecommunications company over a clause in the SIM card registration rules that allows the firm to collect bank details of mobile phone users.

Clause 3.2.1 in the data privacy statement, which subscribers filled as part of the re-registration process, states that the telecoms operator can “collect and store information including credit or debit card information, information on bank account numbers, Swift codes or other banking information”.

High Court judge Chacha Mwita allowed two senior counsels, Wilfred Nderitu and Charles Kanjama, to invite other subscribers to the class action suit through the press for Safaricom to delete the clause. The judge directed the lawyers to publish a notice in a daily newspaper, inviting Kenyans who may wish to join the suit.

The clause appears in a 58-page document that has the terms and conditions attached to last year’s update of SIM card registrations.

The lawyers argue that Safaricom’s dominance of the Kenyan mobile market forced subscribers to accept the clause, arguing that users had no leverage to decline inking the SIM card registration rules.

Safaricom’s market share stood at 66 percent in September while that of rivals Airtel and Telkom Kenya stood at 26.3 percent and 4.9 percent respectively.

“As such, the stringent mechanisms and crafty ways of collecting data without assurance of data security are precipitated by the thought that its clients have no option but to opt-in for them to continue enjoying the products and services that it offers,” Mr Nderitu said.

Safaricom opposed the class action suit before the judge agreed to the invitation of other subscribers to challenge the giant telco.

“That on 15th October 2022, I learnt with utter shock and dismay that my SIM card had been suspended. As a result, I could not make calls, send messages, access my M-Pesa wallet or make any payments,” Mr Kanjama said.

The case will be mentioned on March 14 and Safaricom and the Communications Authority of Kenya (CA), the sector regulator, have been ordered to file their defence within seven days.

Boat Capsizes At The Lamu Channel