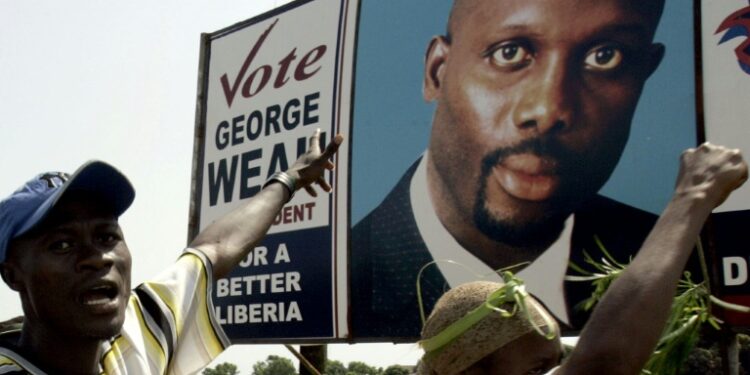 George Weah has been president of Liberia since 2018 | AFP

The son of Liberia’s ex-footballer president, George Weah, has been handed a six-month suspended jail sentence by a French court for “Ibiza-style” parties at his home in an upmarket Paris suburb.

George Weah Junior, 33, was also ordered to pay 20,000 euros (24,000 dollars) to his neighbors after more than two years of parties that were described as “unbearable” by one plaintiff’s lawyer.

Weah, also a former footballer, acknowledged the disturbances in court but said they were “without intention to cause harm”, according to a statement from the court in Versailles, south west of Paris, following the sentencing last Friday.

The suspended prison sentence was longer than expected, but lawyer Ludovic Tardivel, acting for one of Weah’s neighbors, called it “justified” and “an example.”

“My clients have suffered more than two years of parties as if they were in a nightclub, Ibiza-style… we’re not talking about little evenings between friends,” Tardivel told AFP.

Weah was arrested in Paris in February at a party in a rented apartment in central Paris in breach of a nation-wide curfew that is in place in France because of the Covid-19 pandemic.

The arrest, allegedly for verbally abusing police officers, led to revelations in the French media about complaints from his neighbors in the normally quiet suburb of Saint-Germain-en-Laye.

“Every time the police come for the noise, he gets his diplomatic passport out,” one unnamed neighbor told Le Parisien newspaper in February.

Others recounted evenings of loud electronic music at the 150 m2 apartment, drunken shouting from the balcony, as well as aggressive behavior.

Another neighbor described the parties as “boom-boom music, with girls and champagne.”

Weah Junior signed for his father’s former club AC Milan as a 16-year-old and was selected in the Liberian national squad in 2017, but he spent most of his playing career in lower European leagues in Switzerland and Greece.

Le Parisien newspaper described him as unemployed and on the verge of starting a course in sports management.

George Weah has been president of Liberia, a poor West African nation founded as a haven for freed American slaves in the 19th century, since 2018.

The 54-year-old former striker became the first African to win FIFA’s World player of the year award in 1995.

Kenya unveils $28 billion budget counting on it to spur recovery